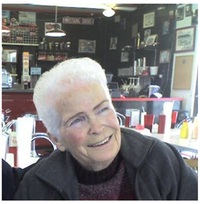 Marvelle Harwood, 80, of American Falls, beloved mother, grandmother, sister and friend, passed away peacefully at her home on Friday morning November 1, 2013.
She was born on November 2, 1932 to David Marvin and Oneita Leishman Morris, in Kemmerer, WY, the third of four daughters. When Marvelle was seven years old, the Morris family moved to American Falls, Idaho, where her father was employed as a section foreman with the Union Pacific Railroad.
On September 8, 1955 Marvelle married Donald Lester Harwood in Elko, NV. After a brief honeymoon they returned to American Fall. The first few summers of their marriage Don and Marvelle farmed Don’s family farm in Roy, Idaho, and would then move back to American Falls for the winter months. In the early 1960's the Harwood’s sold the family farm.
In May of 1960, Marvelle gave birth to their only child, a son, Donald Brett Harwood.
Marvelle worked at various jobs as a young woman, including waiting at the Hometown Café, and as a cashier at the Economy Cash. Once her son Brett entered public school Marvelle re-entered the work force, as a secretary and receptionist at the Farmers Co-op, and then later, for Ken V. Carter CPA, where she retired in 1990.
Marvelle was an active member of the American Falls Ladies Golf Association and the local WBA Bowling league; she also belonged to a bridge club, occasionally hosting the club in her home. She enjoyed watching local little league, American Legion and high school sports, especially during the years when her son, and later her grandchildren were participating. Both Don and Marvelle were founding members of the local golf associations in the late 1950's and continued to golf regularly until their last few years when physical restriction prevented them from doing so.
Marvelle is survived by her son and daughter-in-law, Brett & Lorna Harwood; and six grandchildren: Jennifer, Jonas, Laura Rachel, Jonathan, Liam and Padraig; her sisters Nadine Schritter of Pocatello, and Connie Monson, (Dee) of Caldwell, Idaho. She was preceded in death by her husband Don, her parents, and her older sister Theona Tyler.
The Viewing will be Thursday November 7, from 6 to 7 pm at Davis Rose Mortuary; the funeral service will be at 2:00 p.m. Friday November 8, 2013 with a 1:00 pm viewing at The American Falls Community Church, 745 Bennett Avenue, American Falls.
Condolences and memories may be shared at www.davisrosemortuary.com.

To order memorial trees or send flowers to the family in memory of Marvelle Harwood, please visit our flower store.