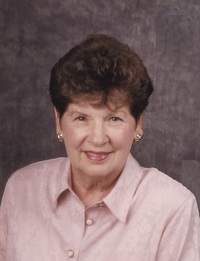 Mary Jane Coman-October 25, 1929-August 7, 2013
Mary Jane was born in Blackfoot, Idaho to Frank and Della Lacy.  When she was one year old, her family moved to Pocatello.  She had two older brothers Ralph and Ray. After graduating from Pocatello High School, she attended ISU. During her freshman year she went on a double date and met Curt Coman, who was her friend’s date.  They eventually started dating and married in August of 1950.  Working in the business department of ISU, she supported them as Curt finished college.
They moved to Rockland where they had Christine Ann and Gregory Curtis.  Once her kids were in school, Mary Jane took night and correspondence courses graduating with a bachelor’s degree in library science in her early 30’s.
After relocating to American Falls in 1971, Mary Jane became media specialist at the high school.  She and Curt enjoyed traveling with his company, family, and friends.  They visited the Caribbean, Ireland, and Africa to name a few of the destinations.  Many of her happiest memories were with Curt, family, and friends at their cabin in Island Park.
Although she was completely totally in love and devoted to Curt, she also adored her children, grandchildren, and great grandchildren.  Friends also were very important to Mary Jane.  She was a true friend to many, cherished by all. Her beauty was everlasting, her personality engaging.
From helping the community through volunteering, delivering meals to those in need, to being an active member of American Falls Community Church, she left a positive Christian influence on each person she encountered. She was an active member of the U Chapter of PEO in American Falls.
Quick to laugh, soft-spoken, polite, generous, living the golden rule, she left the world a better place.
Preceding Mary Jane in death are her parents Frank and Della Lacy, her brothers Ralph and Ray Lacy, and her grandson Michael Gregory.
Surviving Mary Jane is her husband Curt, daughter Christine (Tris) Miller, son Greg (Missy) Coman, granddaughter Melissa (Mike) Hale, grandsons Matthew Douglas, Garrett, Court, and Wil Coman, great grandaughters Lauren and Anna Jane.
The family would like to thank Dr.’s Anderson, Allen, and the 4th floor staff at Portneuf Medical Center in Pocatello that treated Mary Jane with compassion, care, and expertise.
Viewings will be held at American Falls Community Church Sunday August 11 at 6:30pm and Monday August 12 at 9am. There will be a memorial service on Monday at 10am following the viewing.
Donations to Parkinson’s Foundation are appreciated. 1-800-327-4545-PO Box 5018 Hagerstown, MD 21741-5018
Condolences & Memories can be shared at www.davisrosemortuary.com.

To order memorial trees or send flowers to the family in memory of Mary Jane Coman, please visit our flower store.