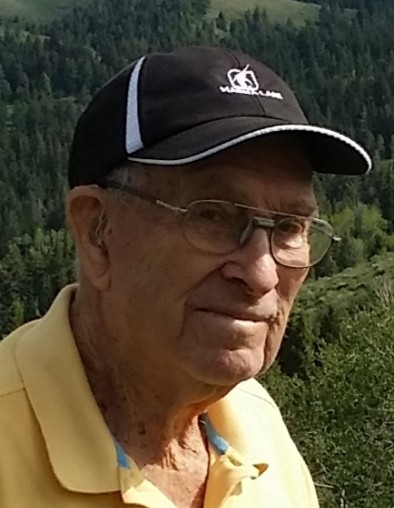 Matthew (Matt) Samuel Weech of American Falls, Idaho, passed away at the Boise VA Hospital, in Boise, Idaho on Sunday, January 3, 2021. He was born April 25, 1926 in Hagerman, Idaho, the 8th of 8 children, to Joseph William Weech and Hester Jane Miller Weech.

He graduated from Hagerman High School where he excelled in football and basketball as well as academics. He was drafted into the U.S. Army in 1944. Matthew married Helen LaVon Stevens on February 8, 1945 in Nipoma, San Louis Obispo County, California. He served in the Phillipines and Japan during World War II before returning to Hagerman.

Matt and Helen had four children: Gary, Linda, Bonnie, and Peggy.  The family lived in Hagerman until 1950 when Matt began following dam construction and related work in Oregon, Washington, and California. The family moved to American Falls in 1961 where Matt helped construct the Lamb Weston processing plant.

Matt worked for two contractors in Pocatello before building the home for his family which he lived in until July of 2020. He started Matt Weech Construction in 1963 and built scores of homes in American Falls and the surrounding area until he reached retirement age.

Matt took up golfing after moving to American Falls and it became a lifetime passion. He was still golfing at 93, two rounds a day, five days a week. His time on the course included 8 holes in one.

Matt was also an avid outdoorsman and supplied his family with fish, deer, elk, and pheasant.

In his later years Matt enjoyed raising a garden and going for long drives in the mountains with his daughter, Peggy, when she visited each month. He was an avid reader as well.

After retirement Matt continued to build projects for family members including stools, cedar chests, and toys.

Matt joined the Church of Jesus Christ of Latter-day Saints late in life and his and Helen's marriage was solemnized in the Idaho Falls Temple in Idaho Falls, Idaho in 1999.

Matthew is survived by his 3 daughters: Linda Jeruss of Sacramento, California; Bonnie Stanger of American Falls, Idaho; and Peggy Jones of Nampa, Idaho; 11 grandchildren; 34 great grandchildren; and 5 great great grandchildren. He was preceded in death by his parents, his wife, 2 sisters and 5 brothers, his son, 3 sons-in-law, 1 granddaughter and 1 grandson.

A viewing will be held Thursday, January 7, from 1-4:00 p.m., at Davis-Rose Mortuary in American Falls. A service will be available to view live at www.davisrosemortuary.com at 1:00 p.m. Friday, January 8, 2021.  Condolences and memories may be shared at the same website. In lieu of flowers, please make donations to the American Falls Golf Course.

To order memorial trees or send flowers to the family in memory of Matthew Samuel Weech, please visit our flower store.