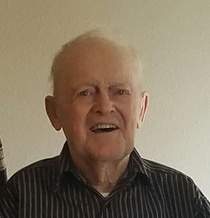 Maurice Paul King, 84, of American Falls, formerly of Aberdeen, passed away Thursday, Feb. 16, 2017.
Maurice was born April 27, 1932 in Aberdeen, Idaho to Paul Dean and Sabra Norean Kendall King.
He graduated from Aberdeen High School and upon graduation served an LDS mission in the Texas/Louisiana mission. After his mission, he served in the Air Force in San Antonio, Texas at Lackland Air Base. Upon completion of his military service, in June 1958, he drove to Inglewood, California to meet Nancy Lou Jensen of Brigham City, Utah. They were married in the Logan LDS Temple on November 22, 1958, on Nancyâ€™s 22nd birthday. They lived in Raft River, ID where they ran the Raft River Store and farmed for several years.
In May of 1973 they returned to Aberdeen where they raised their family. Maurice apprenticed as an electrician at Lamb Weston in American Falls. He worked as an electrician at FMC Corporation in Pocatello for 16 years.
He is survived by his wife Nancy, children Darla Barclay (Kirk), Sheldon Maurice (Jennifer), Vince Burton (Michelle), 16 grandchildren, 8 great grandchildren, sisters Beatrice Jensen and Roma Stevens. He was preceded in death by his parents, sisters Coral Robinson, LaRue Youd, brothers Max, Lowell, Howard and Veryl King and granddaughter Camille King Barclay.
A viewing will be held Tuesday, February 21 from 6-7 p.m. at the Davis-Rose Mortuary, 170 Idaho St, American, Falls. Funeral Services will be held at 11:00 a.m. Wednesday, February 22, 2017 at the American Falls LDS Stake Center with a viewing from 9:30-10:30 a.m. Burial will follow at the Aberdeen Cemetery.  Condolences and memories may be shared at www.davisrosemortuary.com.

To order memorial trees or send flowers to the family in memory of Maurice Paul King, please visit our flower store.