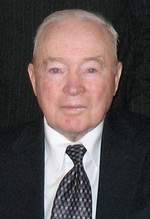 Born on Sept. 3, 1920, in Aberdeen, Idaho, he was the oldest of nine children of Paul Dean and Sabra Norean Kendall King.  Max lived most of his life in Aberdeen, leaving home for missions, military, and college.  In recent years, he resided with his daughters Marilyn in Murray, then Ruth in Highland, Utah.

Max graduated from Aberdeen High School in 1938, and then worked with his father on the family farm until serving a two-year mission in 1941 for the Church of Jesus Christ of Latter-Day Saints in California.  Upon returning, he served in the Navy 2 1/2 years during World War II, stationed in the South Pacific.  He then attended Brigham Young University where he met Ilene Hale.  They were married Aug. 15, 1947, in the Salt Lake LDS Temple.

Max and Ilene settled in Aberdeen where they owned and operated a dairy farm with the help of their children.  Life consisted of milking cows, raising and harvesting hay, corn, wheat, potatoes, and raising some hogs, chickens, and horses.  Their hard work paid off as they were able to assist all of their children in obtaining college educations and serving LDS missions.   Later he served two missions with his sweetheart, Ilene, in the Pennsylvania Pittsburg Mission and the Louisville Kentucky Mission.

In the community he served as the Aberdeen PTA president two years, and was involved with the Farm Bureau, Farmers Union, National Farmers Organization (NFO) and the American Legion.

For fun, he loved driving his team of horses, pulling a wagon or float for the Aberdeen Daze or the July 24th Parades, filled with family, grandchildren, or neighbors riding along for the fun.  Fishing, even on the ice, was a great pastime he enjoyed with his dear fishing buddies.  In addition Max loved reading, traveling, visiting relatives and friends, and spending time with his children, grandchildren, and great-grandchildren.  A highlight of his day was when the great-grand kids came.  Even when harvest was going full steam, he would make time for friends who had stopped for a visit.  He so enjoyed keeping in touch with old friends and making new ones, even at the care center.

To order memorial trees or send flowers to the family in memory of Max Kendall King, please visit our flower store.