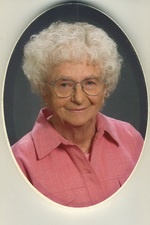 Maxine Harwood of American Falls died August 3, 2012 a month short of her 94th birthday.  She was the daughter of Peter and Lou Kujawa, born September 8, 1918 in Rockland, Idaho.  Her mother died when Maxine was 2½ and her father left the family to return to California.  Maxine and her 11-month younger sister Rowene were raised by their aunt Vera Darling and their grandmother Cora Darling who was the Power County Superintendant of Schools from 1921 to 1933.

Maxine attended school in American Falls and after graduation attended one year of business school in California.  She returned to American Falls worked briefly at the Power County Press. On November 10, 1939 she married Wayne Harwood to whom she was married until his death on May 24, 2000.  Wayne and Maxine spent their entire work lives farming in the Rockland Valley and maintaining both the ranch home and the home in American Falls – across the street from the home in which she had been raised.  They sold the farm and retired in 1977.

She was a faithful member of St. John’s Lutheran Church which she enjoyed and supported until her death.  Former Pastor Mike and Karen Dismer visited a few days before her death. She was a member of Eastern Star and P.E.O. She dearly loved her P.E.O. sisters and her Hobby Club friends, especially Artha, Bobbie and Arlene.

Maxine is survived by her sons Bart (Julie) of Boise and Bob (Tuyen) of Ketchum, grandchildren Greg and Wendy Harwood both of Boise, and four great grandchildren.

Maxine’s family deeply appreciates the friendship and assistance given to Maxine by her friends, P.E.O. sisters, members and pastors of the Lutheran Church, caregivers and others in the community- too numerous to mention individually.  Maxine cherished living in American Falls because everyone was so good to her.

Condolences and Memories may be shared at www.davisrosemortuary.com.

To order memorial trees or send flowers to the family in memory of Maxine Harwood, please visit our flower store.