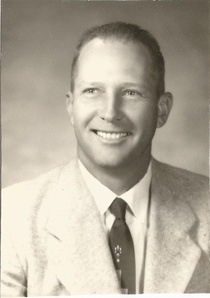 The pink bunny that kept going and going has now gone. Albern Merrill Holyoak has taken his last ride on this power chair after having been seen riding all over town in American Falls. Merrill was born and raised on a farm in Burley, Idaho and graduated from Burley High School. Then, after serving his country as a sailor in the Navy during WWII. He served his church as a missionary for two years in Louisiana. He graduated from Utah State Agricultural College, now Utah State University, and taught for six years as an FFA advisor in Murtaugh, Idaho and was a principal there. Upon receiving a science scholarship to the University of Utah, he received a Masterâ€™s Degree and taught chemistry and physics at American Falls High School for eleven and a half years. His life changed for him and his family in January 1971, when at the tender age of 44, he had a debilitating stroke, which retired him from the workforce. He was very active in the LDS Church all his life. He never lost his sense of humor and he had many friends.

After quite a few years his abilities did not function as well and he eventually had to rely on getting around on his power chair, which he rode all over town. After having ups and downs and help from a physical therapist, we called him the Pink Energizer Bunny because he kept going and going. Now, four months before turning 90, he has finally taken his last ride and on Tuesday night, April 5, 2016, the Pink Bunny ran out of power. Merrill spent his last years of his life at Quinn Meadows in Pocatello where he received excellent care.

Gone ahead and waiting for him are his parents Lovell and Anne Holyoak, his son Gary Lovell Holyoak, his brother Alan and his wife Jean Holyoak, his daughter-in-law Lennox Holyoak and brother-in-law Richard Vorwaller.

Condolences, memories and photo may be shared at www.davisrosemortuary.com

To order memorial trees or send flowers to the family in memory of Merrill Holyoak, please visit our flower store.