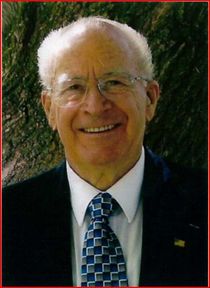 Milton T Poulson passed away on August 26, 2014 at his home in Rockland, Idaho, one day before his 87th birthday.  He was born at home in Duchesne, Utah on August 27, 1927 to Florence Todd and Mont S. Poulson.
Milton was raised on the family ranch and spent many hours with his Dad raising hay and herding cows.  He attended grade school and high school in Duchesne, Utah.  He attended Brigham Young University.  He served in the Korean War.
Milton married Pauline Larsen on November 9, 1955 in the Salt Lake Temple.  They raised 6 children, Lorri, Cris, Jan, Jill, Malyn and Todd.  They lived in Duchesne until 1967 when they moved to Paragonah, Utah and raised chinchillas and Milton worked on the church farm.
In 1973, they moved to Rockland, Idaho and bought the Rockland Merc.  Milton worked at the Rockland School in maintenance and janitorial.  He retired in 1992.
Milton was a faithful member of the Church of Jesus Christ of Latter-Day Saints serving in various callings.  He and his wife served missions to Adam-ondi-Ahman in Missouri and the Member Location Mission in St. George, Utah.
Milton enjoyed ranching and loved horses and cattle. He was an artist.  He loved to sketch and paint.  He made harnesses, saddles, and bridles for model Breyer horses and built a miniature sheep camp and hay wagon. He was a skilled carpenter.
Milton is survived by his wife of 59 years, Pauline, of Rockland, Idaho, children, Lorri (John) Robinson, Rockland, Cris (Carol) Poulson, Lafayette, Colorado, Jan (John) Gilbert, Richmond, Utah, Jill (Gene) Nelson, Rockland, Todd (Janae) Poulson, Layton, Utah, Rex (Dee) Johnson, Bern, Idaho, 20 grandchildren, and 11 great-grandchildren, and his sister, Joan (Arden) Robbins, Vernal, Utah.  He is preceded in death by his parents, sister, Elaine Shisler, daughter, Malyn Johnson, and grandson, Matthew Gilbert.
The family would like to thank Access Hospice Care.  A special thanks to Shylo, Tia and Kristy for all their support and loving care.  Thanks to Davis-Rose Mortuary for their help and concern.
The family will receive friends and family at a viewing from 6:00p.m. to 8:00 p.m. on Friday evening August 29th at Davis-Rose Mortuary in American Falls.  Funeral Services will be held Saturday August 30th at 11:00 a.m. with a viewing prior to services from 9:30 a.m. to 10:45 a.m. in the Rockland LDS Church, Rockland, Idaho.  Interment will be in the Rockland Cemetery with Military Honors. Memories and condolences may be shared online at www.davisrosemortuary.com

To order memorial trees or send flowers to the family in memory of Milton T Poulson, please visit our flower store.
Send a Sympathy Card