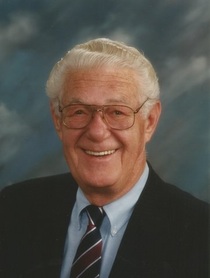 Former Idaho State Senator, Ralph Merrill "Moon" Wheeler, Jr. passed away suddenly at his home in American Falls, Idaho on the morning of July 2, 2014. Moon was born in American Falls on August 10, 1932, the son of Ralph M., and Monne Zemo Wheeler. The Wheeler family homesteaded in the Rockland Valley in 1910. Moon was educated in American Falls, graduating from high school in 1950. He was active in athletics and was Student Body President. After attending the University of Idaho for one year, Moon transferred to Idaho State University. He was graduated from ISU in 1954 with a degree in Pharmacy. He returned immediately to American Falls, taking over the management of the Rockland Pharmacy from his father. He expanded into new, larger quarters in 1962, and again in 1976. He sold the business in 1988, and retired. He retained the family dry farm in Rockland (wheat) until 2008.
Moon married Patricia Howard in Reno, Nevada in 1951. Four children were born-Vickie, Michael, Edward, and Jodi. Pat died in November of 1964. Moon married Ann Reed in Norwich, Connecticut, on June 19th, 1965. Two sons, Clark and Ryan, were born to this marriage. They had celebrated their 49th anniversary less than two weeks before Moon's death.
Moon's life was one of commitment and contributing, to family and community. He believed in his town, his county, his state and his country. He demonstrated that belief through his public service in his political career, and community activities.
He was looked upon as a mentor by many he worked with. He was considered forthright and fair in addressing issues. He had 39 years in elected office, starting in 1957, and ending in 2002, with one six year gap. He served as a city councilman and mayor of American Falls, as a member of the Idaho State House of Representatives, Commissioner for Power County, and as an Idaho State Senator. While mayor, Moon spearheaded the American Falls Marina, (sometimes referred to as "Moon's Lagoon") and the Senior Citizen Housing complex. His pharmacy employees devised a "Rent-A- Mayor" fundraiser to benefit a terminally ill teenaged resident. The effort went nationwide. He served as the President of the Idaho Cities Association, and was the AIC Legislative Chair. During his two terms in the House, he was honored as the Outstanding New Legislator for Idaho by Rutgers University, and sponsored the bill establishing statewide kindergarten in the public schools. Moon was also the author of the Constitutional Amendment establishing the Idaho Legislative Compensation Committee in 1976.  In 12 years as a Power County Commissioner, he spent much of that time as the Legislative Chair for the Idaho Association of Counties, and on the Board of SEICOG.
In 1994, Moon was elected to the Idaho State Senate, an honor he treasured. During his time there he served on Health and Welfare and Local Government and Taxation Committees, along with many interim committee assignments.  He chaired the Indian Affairs Council, and was honored by the Idaho Tribes as an "adopted member". He served until the end of 2002.  Throughout his years of public service, Moon worked tirelessly to improve the treatment of, and for, the mentally ill.
Moon was a big Idaho State University supporter, and served on the ISU Alumni Board for some time. He was at the basketball game when ISU beat UCLA, and took great joy in that moment.  He was on the Dean's Advisory Board for the College of Pharmacy for many years, and was given the College of Pharmacy's Professional Achievement Award in 1999.  The American Falls High School Education Foundation gave Moon its' first â€œOutstanding Alumna Award" in1998. The Foundation honored Moon and his wife Ann with its â€œHeritage Award" in 2009.
Away from politics, he owned and ran the family pharmacy from 1954-1988. He did relief work for several more years, until post-polio developed. Moon had contracted polio in 1955, but was able to rehab enough to work on his feet for another 34 years, as well as enjoy all manner of outdoor activities. He had a particular love for two of those activities, family camping, and fly fishing on as many rivers as he and his fishing compadres could get to. Trips to Alaska and Hell's Canyon were two of the standout memories. As post-polio took its' toll in the 1990's, the rafting and fly-fishing had to stop. At that point gardening took over. Moon's roses and other flowers have been known for their variety and beauty, even though he fought through a bout of cancer he continued to keep the yard and garden up.
In 2010, Moon became part of the Citizen's Advisory Committee for the American Falls Water and Sewer Project. The grand tour of the finished project was held on Wednesday, July 2, 2014.
Moon was predeceased by his parents, his first wife, Pat, his infant son Edward, and his son Michael. He is survived by his loving family-his wife Ann, his children, Vickie (Jon) Smith, Jodi Carlson, Clark Wheeler, Ryan Wheeler, three grandchildren, Kristi Mashni, Chad Smith, and Dylan Carlson, and one great grandson, Ryker Smith. Several cousins and nephews also survive. He was a life-long member of the Catholic Church. A Mass of the Resurrection will be said at 11:00 Thursday morning, July10, 2014, at St. Mary's Catholic Church in American Falls, celebrated by Rev. Thomas Faucher. There will be a viewing on Wednesday night at 6:00 PM, followed by the saying of the Rosary at 7:00. There will be an additional viewing an hour before services on Thursday.
Recommended memorial donations are to the Portneuf Cancer Center in Pocatello, the Idaho State University College of Pharmacy, or a charity of choice.  Condolences and memories may be shared at davisrosemortuary.com.

To order memorial trees or send flowers to the family in memory of Moon Wheeler, please visit our flower store.