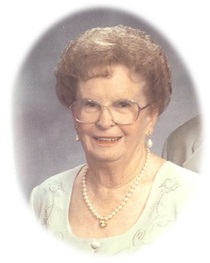 Nadine Morris Schritter, passed away peacefully on August 24, 2015 at Rosetta Assisted Living Center in Pocatello, ID.  She was 86 years old.

She was born in Garland, Utah on July 29, 1929 to David and Oneita Morris, the second of four daughters.  The early part of her childhood was spent in Kemmerer, WY with her family where her father worked for Union Pacific Railroad.  The family moved to American Falls, ID in 1940 where Nadine attended Jr. High and High School. She graduated from High School in 1949.

Nadine married Lenard Schritter on June 12, 1949 at Grace Lutheran Church in Pocatello, ID.  They shared 53 years of life together raising four children on the family farm in Aberdeen.  In her early adult years, Nadine owned a small clothing store in Aberdeen and also worked as an LPN at Harms Memorial Hospital in American Falls.  After the birth of her daughters in the late 1960â€™s, Nadine spent her time raising the girls and exploring her hobbies.  Her loves included traveling, square dancing, painting and ceramics, sewing and tending to her rose bushes.  In her later years, Nadine & Lenard became snowbirds sharing their time between Mesa, AZ. and Aberdeen.  She was an active member of St. Paul's Lutheran Church in Aberdeen.

She was preceded in death by her husband Lenard Schritter; parents, David & Oneita Morris; and two sisters Theona Tyler and Marvelle Harwood.

The family would like to express their sincere thanks and appreciation to the staff and management of Rosetta Assisted Living Center in Pocatello for the love and care they showed our mother.

Funeral services will be held Saturday, August 29th, 2015 at 11:00 AM at St. Johnâ€™s Lutheran Church, 656 Tyhee Ave., in American Falls with Pastor Jon Beake officiating.  Visitation will be Friday, August 28th, 2015 from 6:00 to 7:30 at Davis Rose Mortuary, 170 Idaho St., in American Falls and also at the church beginning one hour prior to the service.  Interment will be at the Fallsview Cemetery in American Falls.

Nadine will be remembered in the hearts of family and friends whose lives she touched with her smile and love.

Memorials may be made to the Alzheimerâ€™s Association at alz.org or to a charity of choice in Nadine Schritterâ€™s name.  Memories and condolences may be shared at www.davisrosemortuary.com

To order memorial trees or send flowers to the family in memory of Nadine Schritter, please visit our flower store.