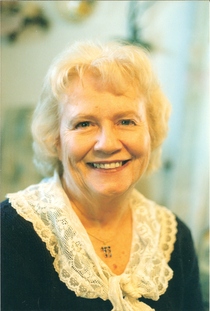 Nellie was born in Rombauer, Missouri to James and Laura (Gray) Fuller on February 2nd, 1928.  She graduated from Wapato High School. Nellie met Charles Linfield Crowder while attending Northwest Bible Institute in Seattle, WA. They were married on June 7th, 1952 in Wapato, WA. Nellie devoted her life to serving in the ministry alongside her husband and raising their four daughters.

Some of Nellie Blue’s favorite things were reading, babies, flowers, gardening, chocolate, and the color blue.

Nellie is preceded in death by her parents, sisters, one brother, her husband Linfield, and her son-in-law Steve Taylor.

Nellie is survived by her brother Luther Fuller, her children Linelle and Rudy Patrick of Meridian, ID, Alice Taylor of Twin Falls, ID, Leilani and Ivan Mussell of Payette, ID, and Sarah and Ron Brown of Boise, ID, thirteen grandchildren, and one great-granddaughter.

A visitation will be at 10 a.m. with the funeral starting at 11:00 a.m. Saturday March 1, 2014 at the Power House Christian Fellowship, 2905 Sunbeam Road, American Falls.  Interment will follow at the Neeley Cemetery.

To order memorial trees or send flowers to the family in memory of Nellie Louella Crowder, please visit our flower store.
Send a Sympathy Card