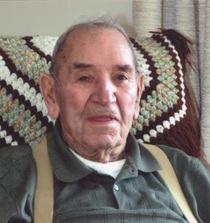 Nels “T.J.” Winters (87) passed away peacefully on January 30, 2014 at the Veterans Home in Pocatello.  He was born on April 4, 1926 to Thomas E. and Beatrice M. Campbel Winters in Chester, ID as the first son of 7 children (6 boys, 1 girl).  He joined the Marine Corps on May 5, 1944 and served in heavy artillery in the battles of Guadalcanal, Peleliu, Okinawa and North China.  He Married Bernice Clark on February 7, 1947 in Ashton, ID.

Nels went to work for The Bureau of Fish and Wildlife in 1953 in Jackson Hole, WY, where he operated heavy equipment and worked in law enforcement and waste management.  In 1966, he moved to Monte Vista, CO to continue his career at the Alamosa/Monte Vista Bird Refuges.  He returned to Idaho in October of 1982, to American Falls where he worked for a short time for J.R. Simplot before retiring in 1990.

Nels participated in the Boy Scouts of America and received the Silver Beaver Award for 30 years of service.  He helped establish the Ducks Unlimited chapter for Monte Vista, CO.  While in Jackson Hole, WY, he, the elk refuge manager and the fish hatchery manager came up with the idea of allowing the Boy Scouts to collect the antler sheds from the refuge to sell as a fund raiser for the local boy scouts.  This took an act of congress but they got it done and it still continues today.  These three men, Joe, Skip and Nels, helped construct the first arch made from the elk antlers collected from the refuge displayed in downtown Jackson.

A viewing will be held at 12:00 pm with the funeral following at 1:00pm, Wednesday, February 5, 2014 at the Church of Jesus Christ of Latter-day-Saints American Falls 3rd Ward.  Donations can be made to the Boy Scouts of America.

Condolences and memories can be shared at davisrosemortuary.com.

To order memorial trees or send flowers to the family in memory of Nels TJ Winters, please visit our flower store.