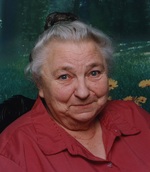 The family had a small homestead outside of Emmett, ID close to Bissell Creek.  Times were very hard for the family, but the love of God and love for each other kept them strong.  Nona's Mother and Father both became very ill and she became the caretaker of her parents and young brother at the age of 8.  Nona was able to complete the 8th grade before she had to quit and find work to help support the family. She later completed her GED.

Nona met and married her life partner Troy Cleo Rogers while working in Ordnance, OR at the bomb depot during World War II.  They were married January 5, 1945. Troy and Nona were blessed by the birth of their daughters Bonnie June and Linda Diane.  The family lived in Pendleton, OR until 1958, and then moved to American Falls where they made their home until their deaths.

Troy and Nona were very proud and loving foster parents to over 350 children, 3 of whom were adopted.  William Troy and Kimberly Cleo were the first two in 1975 and then Gina Marie in 1978.
The family thrived with Troy and Nona's love, hard work and gentle guidance for all.  Nona will be dearly missed by so many.  Her love touched all who came in contact with her.

Nona was preceded in death by her parents, her husband Troy and two brothers.  She is survived by her brother Harry Neal Browning, Jr. of Carbonado, WA, her daughters Bonnie Clayton of Twin Falls, Linda Broadhead of American Falls, Kimberly (Casey) Mingo of Aberdeen, Gina (Jim) Wheeler of Pocatello, 12 grandchildren, 9 great-grandchildren and 2 great-great-grandchildren.

The funeral will be Thursday, March 29, 2012 at Hillcrest Elementary School, 1045 Bennett Avenue, American Falls, Idaho.  The Visitation will be from 6-8 p.m. Wednesday, March 28, 2012 at Davis-Rose Mortuary, 170 Idaho Street, American Falls.  Interment is following at Falls View Cemetery in American Falls. Condolences and memories may be shared at www.davisrosemortuary.com.

To order memorial trees or send flowers to the family in memory of Nona June Rogers, please visit our flower store.