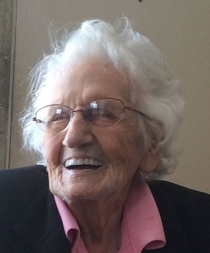 Norma was was born in Neeley, Idaho as the youngest of 14 children to John Christensen and Annie Cassandra Calvert Christensen .  She was married to John “Bud” Russell and had four children (3 sons and 1 daughter).  Bud passed away early in life, as did one young son.  Norma later married Edward Weber who preceded her in death in 1979.  She was also preceded in death by her parents, siblings, and  three sons:  Kenneth, Darwin, and Darold.  She is survived by a daughter, LaRue Hurst; grandchildren:  Brenda Abelgore, Amiee Laun (Donn), Ann Marie Corbridge, Doyle Russell (Kay), Leland Russell, Valline Poulsen (Rowdy). William Russell, Charlys Hay (Alec), Lisa James, Tasha Lee (Jeremy), many nieces, nephews, cousins, great grandchildren, and great-great grandchildren.

Norma led a very full life, dedicated to serving others and volunteering in her church community.  She taught primary classes in Burley, and American Falls for many years.  She sang in the Stake Choir, and was a ward choir member.  She volunteered to sit with sick and dying patients at night, both in the hospital and in their homes.   She wrote and contributed the History of Neeley, Idaho to the Stake History.  She was the Ward Work Director for the Relief Society for many years.

From the time she was very young, Norma was interested in genealogy.  She continued to do research up until her death.  She has taught classes on genealogy research and served as the librarian in the Pocatello Genealogy Library when she belonged to the Pocatello Stake.  She left a rich, detailed legacy of family history through her genealogy research which dated as far back as the 1600s.

Norma was renown for her beautiful flowers and lush gardens.  It was well-known that she could grow anything.  Her yard was full of rare plants and flowers which were not supposed to be able to survive in Idaho’s harsh weather, dozens of rose bushes, spring flowers, iris, violets, ferns, and every type of vegetable.

To order memorial trees or send flowers to the family in memory of Norma Weber, please visit our flower store.
Send a Sympathy Card