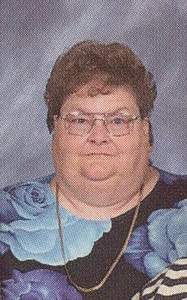 Pam Dyer, 63, of American Falls, Idaho passed away September 9, 2013 at the Power County Nursing Home.  She was born in Waldron, Arkansas to Doris and Frederick Speaks.  Her Mom died when she was at a young age, and her father could not take care of Pam and her siblings.  She was later adopted by Kenneth and Margret Pomeroy in Texarkana, Texas.  She lived in Texarkana, Texas then she came to Idaho in 1982.

She was preceded in death by her parents, adopted parents and one brother.  She is survived by her husband Calvin Dyer, her son Kenneth Dyer, of American Falls; several sisters, brothers, nieces and nephews.

Calvin and Pam would have been married 31 years at the end of this month.

The funeral Service will be at 11:00 a.m. Saturday, September 14, at St. John’s Lutheran Church, 656 Tyhee Avenue, American Falls.  The visitations will from 6-8:00 p.m. Friday September 13, in the Fireside Room at the church, and Saturday from 10-10:45 a.m. before the funeral.  Donations can be made to Luther Heights New Lodge.  Condolences and memories may be shared at www.davisrosemortuary.com.

To order memorial trees or send flowers to the family in memory of Pam Kay Dyer, please visit our flower store.