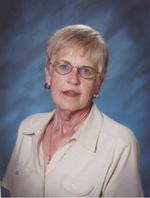 She married Gary Dee Buffi, February 3rd, 1968 and they had two children.  The couple later divorced.

Pat managed the Idaho State Liquor Dispensary in American Falls for many years and enjoyed the contact with her community that the job allowed.  Recently, she had worked for the Meridian School District, Meridian, Idaho.  She loved the students she worked with and took great pride in following in the footsteps of her mother, who had been a teacher.

Her fondest memories were of times spent with family during her youth.  In particular, she cherished spending time with her siblings and cousins on their grandparents’ farm in Rockland, Idaho.  She also loved the ocean and spent some time living on the coast of Oregon.  Recently, she enjoyed yard work and spent many happy hours gardening with her youngest grandchild.

Pat is survived by her children, Shaunda Buffi and Kimberly Buffi, both of Boise, Id, her grandchildren, Terrayce Lish, Antonio Buffi, Jordon Colungo and Braden Buffi, her Brother, Richard (Monty) Glascock, her sister Paula (Glascock) Anthony, several nephews, a niece,  and her closest friend of over 60 years, Carol (Neal) Cheney.

She was preceded in death by her parents.

Inurnment will be at the Falls View Cemetery at a later date.

Condolences and memories may be shared at www.davisrosemortuay.com

To order memorial trees or send flowers to the family in memory of Patricia Jean Buffi, please visit our flower store.
Send a Sympathy Card