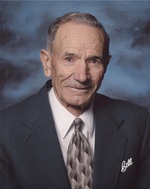 Paul Eugene Kress, 85, beloved family man and friend, graduated with honors from this life on November 21, 2011, at his home as a result of an accident five weeks earlier.

“Gene” was born to Adam Herman and Ada May Brown Kress on June 11, 1926, he was the seventh of eight children.  His parents were hardy pioneer stock who spent their first winter home steading in a tent in the Roy, Idaho area.  When Gene started school, he rode bareback five miles to Mountain View, a little county school with 15 to 20 other students.  His parents rented a home in American Falls after his eighth grade year where he attended high school and was active in sports, and then during the summers, the family would return to the farm, the same farm that Eugene operated until just a year ago.

The romance between Eugene and Gayle Taysom budded during his junior year, and they were married on August 8, 1943, in Rockland, Idaho.  Their marriage was solemnized in the Salt Lake Temple on June 16, 1948.  To them were born five daughters and a son who all benefited from their parent’s strong work ethic and Christian principles.  They, along with the grandchildren who came later, learned firsthand about the Law of the Harvest through farm work and even a few years in the dairy business just to round out their characters.

Eugene was active in community and church affairs.  He served on the school board, town board, and as mayor.  He also served in the army during World War II in Korea.  He was very active in The Church of Jesus Christ of Latter-day Saints on both the ward and the stake levels. At the time of his death, he and Gayle had worked as ordinance workers in the Idaho Falls Temple for 13 years.  Service to others governed their lives whether it was helping someone get in the harvest,attending to the sick, or bulldozing snow out of driveways and the church parking lot.  They lead by example.

An active involvement in kids’, grandkids’, great-grandkids’, and great-great grandkids’ lives took them many miles to athletic events, performances, and church activities.  They were also active boosters of Rockland School events.

Funeral services will be at 11:00 a.m. Saturday, Nov. 26, at The Church of Jesus Christ of Latter-day Saints, Rockland, Idaho.  The visitation will be from 9:30 a.m. to 10:45 a.m. at the church prior to the funeral.  Interment will be at the Valley View Cemetery in Rockland.  Condolences and memories may be shared at www.davisrosemortuary.com.

To order memorial trees or send flowers to the family in memory of Paul Eugene Kress, please visit our flower store.
Send a Sympathy Card