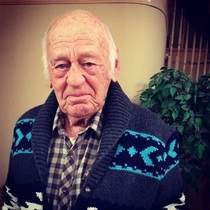 Paul Sjelin was born in Minneapolis, Minnesota on February 13, 1924 of Swedish immigrants Carl and Alma Sjelin. After completing his 8th grade year in a one room country school in rural Minnesota, he transitioned to full-time work on the family farm.

Shortly before his 18th birthday, Paul enlisted in the U.S. Navy.  Upon completion of his training as a marine motor diesel mechanic, he spent the remainder of World War II in the South Pacific conducting and supervising naval ship power plant repair and overhaul.  One of his fondest memories of his naval advanced training in San Francisco was riding the streets near the naval base on his “cop style” 1200 cc Harley Davidson motorcycle.  Paul rose to the rank of Chief Petty Officer before leaving the U.S. Navy upon the conclusion of World War II.

Shortly after his return to Minnesota from the South Pacific, Paul and his lifelong friend and navy buddy, Ray Anderson, took two young sisters from North Dakota on a double date.  One of those sisters, Juanita Brubaker, became Paul’s bride on June 28, 1947 in Egeland, North Dakota, near her home town of Cando, North Dakota. Together they had four children: Kenyon, Paula, Kevin, and Kerry.

The Sjelin family resided for many years in Brooklyn Center, Minnesota, a suburb of Minneapolis.  Paul built a successful cement contracting business and Juanita managed the home.  Their faith and active involvement in their local church remained the center of their marriage and family life.  Paul, always the adventurer, balanced his family and work responsibilities with hunting, fishing, and flying his airplane.

In 1966, the Sjelin family relocated to the Long Beach area of southern California. There, Paul worked with his brother Carl in the construction business.  In 1971, while pursing the daily newspaper, Paul noticed an advertisement for the combined sale of a large country grocery store, a 10,000 chicken egg farm, a large stockyard and slaughter house, and two homes. The properties were located in the valley of Rockland, Idaho, a beautiful landscape of southern Idaho.  Paul, along with partner Bill Greene, pooled their resources and made the investment.  It was in July of 1971 that Paul moved his family into the Rockland valley. After a short duration of operation, Paul decided that the egg farm and grocery store business was not his cup of tea.  He sold those businesses and launched Paul Sjelin Construction, bringing him back to the occupation that better suited him. Paul was well adapted for all phases of the construction business, but chose to specialize in masonry and steel building construction.

Living in Idaho also allowed Paul to also pursue his love for the outdoors.  Paul’s adventures included: big game hunting, bow & arrow hunting, fishing, horseback riding, snowmobiling, and traveling cross country and sight-seeing with Juanita as they pulled the Airstream trailer.  Paul was known for his antics while riding snowmobiles well into his 70s with his younger companions.  At the age of 80 years, Paul broke both sides of his collar bone after a crash and reluctantly sold his remaining snow machines.  Paul remained quite active into his 80s, personally operating his backhoe and dump truck for various engineering projects for the City of Rockland.  After transitioning into full retirement, Paul and Juanita enjoyed sightseeing, spending time with relatives in both Minnesota and California, talking politics, attending church services, and having meaningful one-on-one conversations about life and the saving grace of God’s love.

Paul had a rich and fulfilling life with an amazing variety of life experiences.  As a husband, father, brother, and friend, Paul made an impact upon countless lives. His faith was always a shining light that no one could ignore.  I know he will be missed by the many family and friends that he leaves behind.

A Memorial Service will be held April 5, 2014at the American Falls Christian Fellowship, 329 Harrison, 11 a.m.

To order memorial trees or send flowers to the family in memory of Paul Harold Sjelin, please visit our flower store.