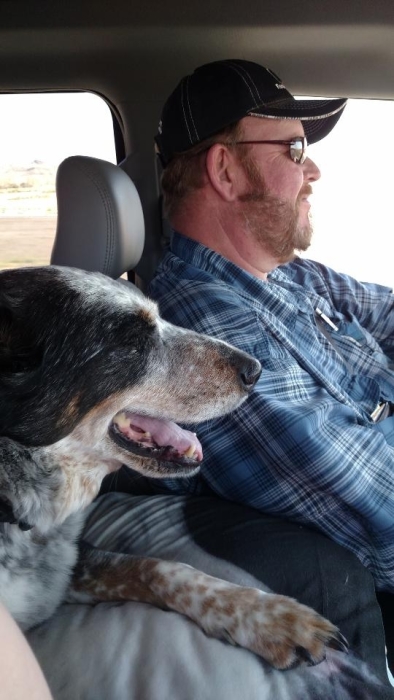 “Pete” Robert Ewill Williams passed away at home March 1, 2020 with his wife, son Travis and his animals all by his side. Pete has continued on to reunite with his beloved Kenai following a courageous fight against cancer.

Pete was born on August 3, 1963 to Ewill and Shirley Williams in American Falls, Idaho. He was the third of their three children. Pete married Lynette on August 24, 1985 and they have two sons TJ and Travis.

He grew up on the family farm and ranch where he found a deep love for the land and animals. Pete took over the family farm and was proud to be an Idaho potato farmer. Pete was also proud to say his hands worked the ground that he farmed. During this time all the ranch animals soon became pets. He loved all the farm animals especially the dogs, cats, and horses. He always had a canine companion with him in the tractor or truck. Pete loved the farm and being at home. It was this same home that he was brought to as an infant that he passed from as an adult. Pete spent all 12 years in the American Falls school system graduating in 1981.

Pete was a life-long and active member of the American Falls community that he loved. He spent 35 years as a member of the American Falls City/Rural Volunteer Fire Department, serving as Fire Chief over the last 14 years. The amount of fire calls and extrications that he responded to over the years were numerous.  He served 34 years with the Power County Search and Rescue serving as Commander for 23 years. He restarted the annual Salmon BBQ, the largest fundraiser for the unit, which still continues today. His vast knowledge of the reservoir, river, farm area, and surrounding mountains helped Pete in numerous searches in Power County. He is a member of the Idaho State Search and Rescue in which he held many positions at the state level including Zone 2 Training Rep, Quartermaster, 2nd Vice Commander and the Idaho State Commander for 2 years during 2005 and 2006. He received the distinguished Everett Bogart Memorial Service Award and a 30 Year Active Service Award for 30+ years of dedication and active service to Search and Rescue. Pete was the Power County Sheriff Marine Deputy for 12 years from which he received a State of Idaho Honorable Service award. He loved serving his community and all the people he met along the way. He also served as a Reserve Patrol and Power County Road Deputy. He served the Power County Soil Conservation District for 14 years. He was a First Responder, Boy Scout Leader, a member of the Power County Water Ways Committee and member of the Idaho Fire Chiefs Association. Pete was very instrumental in his work on grants obtaining numerous amounts of equipment and buildings to serve the emergency needs of the community.

Pete loved home, campouts with RZR rides, and traveling the world with his many friends that were his family. He enjoyed anything with farming and tractors, anything ranch and western, fishing and fly tying, Disney, and playing with full sized Fire Trucks. He especially loved following the adventures and competitions of his son Travis.

Pete is survived by his loving wife of 34 years and his 2 sons.

Pete’s love, dedication, and sacrifice to those families he served will be greatly missed.

To order memorial trees or send flowers to the family in memory of "Pete" Robert Ewill Williams, please visit our flower store.
Send a Sympathy Card