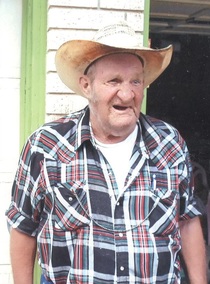 Ralph F Barrett passed away peacefully at home in the early morning hours of January 12, 2015. Ralph was born January 19, 1937 in American Falls, Idaho to Johanna M. and David H. Barrett. He was the oldest boy and fourth child out of five.
Ralph grew up on a dairy farm in the Lake Channel area of American Falls. He graduated from American Falls High School in 1955. He joined the Army in August 1961 and obtained the rank of Private 1st class before taking a hardship withdrawal in April of 1963 to be on the farm when his father became ill. He worked for Power County Implement and on the Bowler Ranch then was truck driver for Snake River Cattle. Ralph competed in rodeo as a bare-back and saddle-bronc rider.
In late 1970, Ralph “got his courage up” and asked Susan G. Clouser to marry him at the old railroad livestock corral. They were married on December 28, 1970 in Elko, Nevada. Together they had three children and Ralph had a daughter from a previous marriage. They also helped “raise” many of the kids’ friends and many consider Ralph to be a 2nd Dad.
Ralph is survived by his wife, Susan; daughter Kaye Lynn Henderson; daughter Johanna Barrett; daughter Kathy and Johnny Hernandez; son Jake Barrett; grandchildren Aubrey and Matt Ferris, Skylar Henderson, Brianna and Shawn Brunson, Heather and Jose Lara-Hernandez, Noah Dossey, and Hope Dossey; and great grandchildren Kannon, Cedric, Baelee, Abriean, Adan, and Jocelyn; as well as many nieces and nephews and several cousins.  He was preceded in death by his parents, sister Elsie Jarvis, sister Lois Goebel, brother-in-law Frank Goebel, sister-in-law Judy Barrett, and granddaughter Tambi-Dawn Barrett.
A memorial service with be held at 11:00 am on Saturday, January 17, 2015 at the LDS 3rd and 4th ward building at 650 Pocatello Ave in American Falls, Idaho. A visitation will be held prior to the services beginning at 10:00 am and graveside services to follow the service. A small luncheon will be served following internment at the LDS 3rd and 4th ward building.
condolences and memories may be shared at davisrosemortuary.com

To order memorial trees or send flowers to the family in memory of Ralph F. Barrett, please visit our flower store.