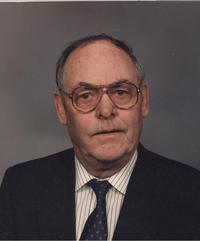 He Married Emma Jean Rast on August 7, 1957.  They had three daughters and one son.

He was a great farmer or potatoes and wheat in Pleasant Valley and the farm was known as Roadrunner Farms.  His prized possessions were his John Deere 4020 and his 1976 Lincoln Continental.  His hobbies included trap shooting and taking care of the lawn, which he was so proud of.

We extend gratitude and thankfulness to Ashley Manor for their excellent care of our Dad.  We will all miss you Dad!

Graveside services will be Saturday, October 5, 2013, 11:00 a.m., at Falls View Cemetery with a luncheon following at St. John’s Lutheran Church.

To order memorial trees or send flowers to the family in memory of Raymond B. Rowe, please visit our flower store.
Send a Sympathy Card