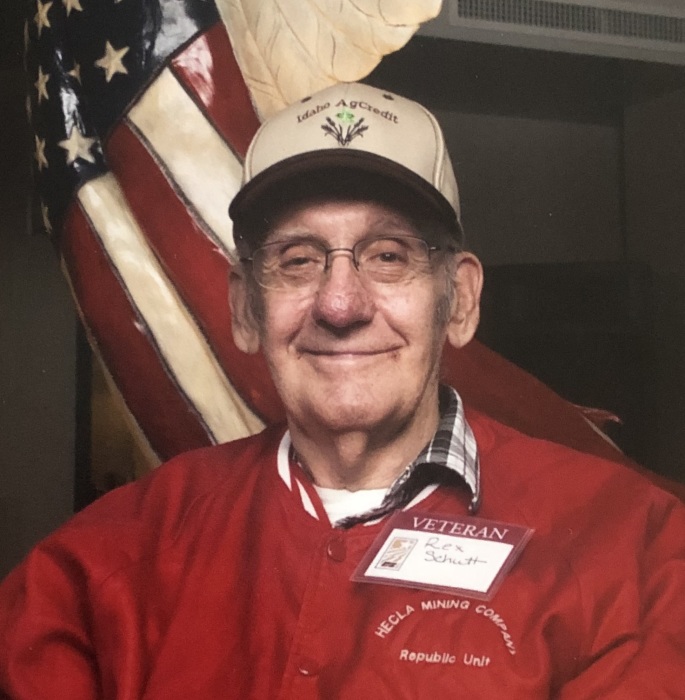 At this very difficult time there is yearning for family and friends to be together and to support each other. Unfortunately, we are also in the thrust of a social responsibility to slow the spread of covid-19. As a family we have decided to do our part and follow the CDC guidelines thus lowering the chance we could put others and their families at risk. We know that is what dad would do.  Due to this we are opening the doors for viewing and will be canceling the dinner after. Please do follow the CDC guidelines during the viewing as well.

Rex passed away peacefully with his family by his side on Thursday, March 12, 2020 at Brookdale Assisted Living.  He is the 4th of 5 children born to the late Frank and Gertrude (Brooks) Schutt he was raised in the farming life.  Rex attended North Walworth Rural School where he was active in sports.  Rex’s love of sports continued throughout his life, he was drafted by the Milwaukee Braves and enjoyed the time he spent in Waycross Ga. playing baseball.  Rex was a veteran, serving in the United States Air Force, it was while in the Air Force that he met the LOVE of his live Joy Ann Lembeck.  In 1957 Rex and Joy married in Republic WA. and moved to Walworth WI.  They were married 50+ until her passing in 2012.  Rex and Joy moved back to Republic in 1964 where they raised their family of four. Republic was his home until 2012 at which time he moved to Idaho.

Rex had a love for pie and ice cream that always put a smile on his face, his thought was have dessert first and if there’s room left then enjoy dinner.   At any time if you asked Rex if he wanted a chocolate milk shake a large smile would come across his face followed by the words “you bet”.  Rex’s love for sports carried into coaching youth sports, baseball (Sanpoil WoodTics this goes way back some of you will remember) and basketball.  Rex coached a youth basketball team of players from the Curlew and Republic area, this team qualified and participated in a national AAU tournament in Huntington West Virginia.  Rex quickly became a favorite of several players from others teams as they teased and enjoyed his company, he was always joking and kidding with those around him, something he did until his passing.

Rest easy now Dad; Mom, your puppies (Nick and Austin), and your family are welcoming you into Heaven with their loving arms. We know that you will again be enjoying playing the sports that you so much loved and eating all the desserts you could ever dream of. We love you so much! Survivors include children Robin Schutt and sons Loren & Jeffry, Ron Schutt and son Colby, Roger & Oralia Schutt and children Jordan & Tiffani, Ryan and Magda Schutt.

An informal viewing, is scheduled at Davis-Rose Mortuary in American Falls on Friday March 20th from 5:00 - 6:00pm. Family and Friends may sign the online guest book at davisrosemortuary.com   Memorial contributions may be given to a Human Society of your choice.

To order memorial trees or send flowers to the family in memory of Rexford Martin Schutt, please visit our flower store.