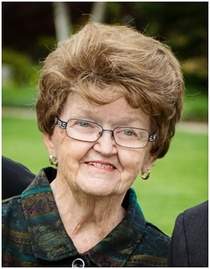 Rhea Barlow Udy died peacefully at the Power County Hospital, American Falls, Idaho on February 27, 2016.  She was born on August 28, 1933 in Burley, Idaho to Israel Call Barlow and Myrtle Roundy Ford. She grew up in Vail, Oregon on a potato and onion farm, with her siblings; Norma, Truman, Newman, Max, Myrtle, Dean, Emma Lou, Eugene, and Sarah.
To Rhea, her family was the most important aspect of her life. She married Leo Carlyle Udy on November 20, 1952 in the Idaho Falls temple. She was very proud of their three sons; Lon Carlyle (Carleen), Kevin Eugene (JoLynn, and then Susan)and Craig Alyn (Julia) and her eleven grandchildren; Raelyn Moffett, Jolyn Smith, Kaelyn Udy, Scott Udy, Sarah Welch, Devin Udy, Landon Udy, Emily Barrera, Jackson Udy, Tyler Udy and Cole Udy.  Her eyes lit up whenever she could visit any of the thirteen great grandchildren.

Leoâ€™s engineering career provided opportunities to live in southern California, Corvallis, Oregon, Centralia, Washington and Kemmerer, Wyoming.  After an early retirement, they made Rockland, Idaho their home base and started a consulting business that took them to live and work in northern California, London, England and San Pedro Sula, Honduras.
As a member of The Church of Jesus Christ of Latter-day Saints, Rhea has faithfully served in many callings. She especially enjoyed working with the youth. She invited them into her home and her heart. Leo and Rhea served several missions together; a service mission to Adam ondi Ahman in Missouri and then as temple construction and engineering missionaries for the Edmonton Alberta Canada, Nashville Tennessee, Snowflake Arizona and Nauvoo Illinois temples. When they came back to live in Rockland full time, they served in the Idaho Falls Temple as ordinance workers.

Rhea was always willing to take on a challenge, such as riding the rapids of the Deschutes River, driving a bobcat, and sleeping in tents at girlâ€™s camp for many years.  She was a welcoming type of person, who invited young people into their home. Foster kids, exchange students, friends and relatives with summer jobs all came to live with them.
The funeral is scheduled for Saturday, March 5, 2016 at the LDS chapel in Rockland, Idaho (405 E Shoshone Street) at 11:00 am following a viewing from 9:45 am to 10:45 am.  A viewing is also scheduled for Friday, March 4th at the Davis-Rose Mortuary in American Falls, Idaho (170 Idaho Street) from 6:00 pm to 8:00 pm.  Condolences, memories and photos may be shared at www.davisrosemortuary.com.

To order memorial trees or send flowers to the family in memory of Rhea Udy, please visit our flower store.