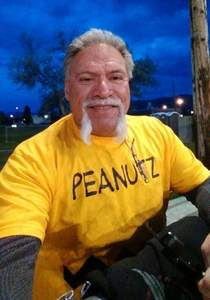 Peanuts was born March 26, 1963 to Robert and Candy Bernal in Greeley, Colorado. As a teenager, he and his family moved to American Falls, Idaho where he attended American Falls High School with the Class of 1981. In 1984, he married Janet Turner. Together they had four children: Tara "Babydoll", Toni "Pumpkin", Robby "Son", and Tiffany "Sweetness". His children were his pride and joy and he couldn't have been happier when he became Papa of Kylie "Tiny T", Xander "Lil Peanut (LP)", Madison "Cupcake", and Aubree " Miss Aubree". He was eagerly awaiting the arrival of his fifth grandchild, Adalyn Leigh and we are sure he was pondering an adorable nickname for her. His family was his life.

He touched the lives of many through coaching little league, baseball, softball, and football. From substitute teaching to participating in a myriad of school events supporting his children from drama to band to sports, he was a favorite among the youth in the community.  For the past couple years he played a key role in the "Peanutz" softball team in Pocatello. He was an avid Denver Broncos fan, loved auto racing, and truly enjoyed riding his Harley. In addition to his hobbies, Peanuts was a lead mechanic at Lamb Weston where for the past 35 years; he was loved by many.

Peanuts never shied away from complimenting those that crossed his path. From his welcoming smile, his comforting bear hugs, and his ease of cracking a joke; he made everyone smile and feel better in his presence.

He is survived by his children Tara (Seth Lootans) Bernal, Toni (Jordan) Johns, Robby (Jamie) Bernal, and Tiffany (Jake) Neibaur; his grandchildren Kylie, Xander, Madison, Aubree, and baby Adalyn on the way; parents Robert and Candy Bernal; siblings Diana (Todd) Miller, Francis (Tony Blaker) Neary, and Ernest (Kelsey Gudmunson) Bernal; the mother of his children Janet Turner and his girlfriend Tina Ringe. He was preceded in death by his grandparents Noberto and Mary Bernal and Ysaias and Guadalupe Pisana, his cousin Nick Baca, and his best friend Tony Madrid.

A 6:00 pm viewing and 8:00 pm Rosary will be held Thursday, June 18th at Presentation of the Lord Catholic Church in American Falls, ID. The funeral will be held on Friday, June 19th at 10 a.m. also at the Presentation of the Lord Catholic Church. Interment will follow at Falls View Cemetery. A dinner in his memory will be held after the service at the American Falls City Park, east side. Please join us by bringing your favorite dish and memories of Peanuts to share.

Please help us honor his memory by carrying on his legacy. Spend time with your loved ones and cherish them. Reach out to a stranger and make their day. Share laughter and smile whenever you can. Memories and condolences may be shared at www.davisrosemortuary.com.

To order memorial trees or send flowers to the family in memory of Robert Bernal, please visit our flower store.