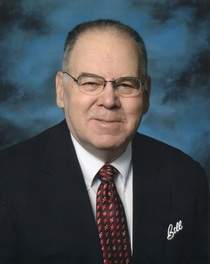 Robert Luther Radford, 79, of Rockland, ID passed away Friday morning, April 1, 2016 at Power County Nursing home.
Robert was born on June 21, 1936 to Stephen Luther Radford and Mary Lillian Nelson Radford.  He was the youngest of 11 children.  Robert graduated from Preston High School in 1954 and went directly into the army.  He was received into the army on August 4, 1954 and was honorably discharged on July 18, 1956.  Robert went to work for Safeway Food Stores in Pocatello.
Robert met the love of his life, Sharel Ann Smith in October 1956.  They met through his niece, Nola Tillotson, and it was love at first sight for him.  Two weeks later they were engaged.  Bob and Sharel were married on April 17, 1957.  After Robert and Sharel were married they lived in Pocatello.  Robert was promoted to Assistant Manager at Safeway and they moved into a bigger home where Karla, Bobby, and Terri were born.   In 1962, Robert was transferred to Idaho Falls.  In 1964, Robert went to work for Associated Food Stores in Pocatello.  Robert and Sharel were glad to be back in Pocatello.  Ronald was born the following July.  Anna was born in 1967 and Robert went to work for Brookâ€™s IGA.  In 1969, Robert and Sharel leased the Sunset Motel on 5th St. and Robert went back to school at ISU.  Robert graduated from ISU in 1974.
Robert and Sharel moved their family to Rockland, ID where Robert started his teaching career.   Robert retired in 1999.  His teaching career lasted for 25 years.  He was also a Jr. High basketball coach, volleyball coach, head teacher, bus driver, and Drivers Ed teacher.
In 1981 Robert was elected Mayor of Rockland.  He was the Mayor until 1984.  Robert enjoyed living in Rockland and sitting on his deck visiting with his family and friends.  In his younger years in loved to hunt and enjoyed the outdoors.  Later in life, his hobby was taking pictures of his family and friends.  You just knew when dad was around, to be prepared to get your picture taken.  Robert loved his wife, children, grandchildren, and great grandchildren very much.  He had a heart of gold.
He is survived by his wife, Sharel, his three daughters, Karla (Bob) Reaves of Rockland, Terri (Bart) Miller, Anna (Vern) Mason of American Falls,  his son, Ronald (Kathy) Radford of Meridian, nine grandchildren, six great grandchildren, and one brother, Grant Radford.  He is preceded by his son, Bobby and daughter-in-law, Tracie, his parents, six sisters, and three brothers.
A celebration and remembrance of Robertâ€™s life will be held on Saturday, April 9, 2016 at the Rockland LDS Church.  A viewing will be held from 9:30-10:15 prior to the service at 10:30.  Burial will be under auspices of the American Legion Roland Evan Post #3 at the Rockland Cemetery.
The family would like to thank family, friends, and the Power Co. Hospital and Nursing home for their kindness and support as they comforted our dad in his final days.
To share memories, condolences, or photos, please visit www.davisrosemortuary.com. In lieu of flowers, the family would like to request donations be made to the Rockland Education Foundation.

To order memorial trees or send flowers to the family in memory of Robert Radford, please visit our flower store.