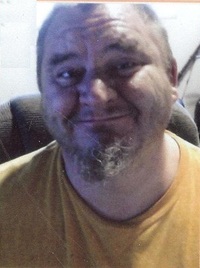 Robert Lee Rizer II, 45, passed away at Portneuf Medical Center on September 11, 2013. Robert better known as Bobby to his family was born October 5, 1967 to Robert lee Riser and Margaret Rizer in Columbus Ohio. Bobby was the third of four children. He spent his early childhood in Ohio and then moved to Idaho. He has lived in Blackfoot, Aberdeen and had recently moved to Pocatello. Bobby was blessed with one child Robert Lee Rizer III on January 11, 1994.

Bobby was preceded in death by all 4 grandparents, 3 uncles and 2 aunts. He is survived by his son Robert Lee Rizer III of Pocatello, his parents Robert and Margaret of Pocatello, his brother Lee ( Carolyn) Rizer of Louisville Texas, sister Nova (Fred) Robinson of Aberdeen, sister Tonya (Lonnie) Leslie of Pocatello, cousins, aunts, uncles, nieces, nephews and numerous great nieces and nephews. The memorial service will be at 1:00 p.m. Monday Septmber 16, 2013 at Power House Christian Fellowship, 2905 Sunbeam Road, American Falls, Idaho.  Condolences and memories may be shared at www.davisrosemortuary.com.

To order memorial trees or send flowers to the family in memory of Robert Lee Rizer, please visit our flower store.
Send a Sympathy Card