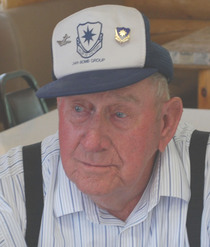 Robert Schroeder celebrated his 90th birthday on March 21, 2014. Robert has lived a cornucopia of history. This included aviation, changes in the local area fo early farms and families, and farming technology and machinery.

He was born to parents Richard and Margaret Schroeder in Paso Robles, California on March 21, 1924. The family returned to Idaho when he was one month old. He has two younger sisters: Ilene (Hartzel) Schmidt, North Newton, Kansas and Cloris Unruh Enns, Hutchison Kansas.

Robert spent his life in the Aberdeen and American Falls area except for his time in the U.S. Army Air Corp. during World War II. At that time, he was in the 8th Air Force, 34th Bomb group as a B-17 tail gunner. He and his crew complete 35 bombing missions. The crew of the B-17 named â€œButchâ€ has only three remaining members who still remain in contact by telephone and cards and letters.

He married the love of his life, Jennie P. Butterfield, on June 8, 1945 after only dating for eight days. Together they had six children, Rich, Ronda, Clifford, Deb, Nick and Troy. Together they settled on the family farm where they stayed until moving to spring Creek Manor Assisted Living. In his early years he raised grain, alfalfa, potatoes and a small herd of dairy and beef animals. In 1961, he built a new dairy barn and became solely a diary farm. Through the dairy business while improving animals, he was associated with Cache Valley Breeders and later on was elected to their board of directors. Endeavoring to improve milk quality and quantity, he became associate with the Dairy Herd Improvement Association and was later elected to the board of directs and later became President of IDHIA.

Years later, with the children moved away to individual pursuits and increasing ages, the dairy business became too much to handle. They were able to sell all the animals and are currently leasing out the farm ground.

He is preceded in death by one son, Clifford, parents Richard and Margaret Schroeder, parentâ€™sâ€“in-law Ferabee and Ivy May Butterfield.

To order memorial trees or send flowers to the family in memory of Robert Schroeder, please visit our flower store.
Send a Sympathy Card