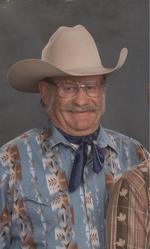 Roger Lee Whitnah passed away unexpectedly at age 77 on June 30, 2011 in Pocatello, Idaho.

He was born on June 11, 1934 in Rupert Idaho to Lloyd and Norabelle Whitnah. Rogers mother died when he was 10 years old. Lloyd then married Velma Wood and together they raised Roger along with their children Doug and Edna on a homestead in Roy, Idaho.

Roger went to school in Rockland and then married Lydia Muller in 1960. They together had 4 children, Shonda, Linc, Nora and Kyle. Roger enjoyed being a rancher in the Roy area and in American Falls. He served on many committees and enjoyed all cowboy activities. Roger is survived by his wife Lydia , His stepmother Velma Whitnah , Brother Doug (Carol) Whitnah, Sister Edna Whitnah. children Shonda Whitnah, Linc (Debbie) Whitnah, Nora Howell, Kyle ( Kat) Whitnah. Father in law Emil Mayer. Roger has 10 grandchildren and 4 great grandchildren. He is preceded in death by his mother Norabelle, father Lloyd, mother in law Melba Mayer, son in law Brian Howell.

Viewing will be held at Davis Rose Mortuary on Tuesday July 5th from 6 to 8.

Funeral will be held at the fine arts center in AFHS on Wed July 6th at 11:00 am with a viewing from 9:30 to 10:30 before service . Interment will be at Falls View cemetery.

In lieu of flowers, family would like memorials to be made to the American Heart Association in honor of Roger Whitnah.

To order memorial trees or send flowers to the family in memory of Roger Lee Whitnah, please visit our flower store.