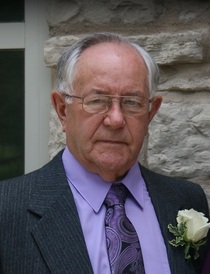 After completing high school, Roland served three years of 1-W voluntary service in Reedley, California, and Evanston, Illinois.  He returned to Aberdeen and married Edith Koehn on November 4, 1960.  Roland farmed for the first three years of married life, followed by three years working at the University of Idaho Research and Extension Center.  Beginning in 1966, Roland worked for 20 years at Jerry’s Oil Company, becoming a co-owner of the Phillips 66 service station.  He worked a brief time as a salesman for Landvatter Motors.  Beginning in the mid-1980s, Roland worked at the University of Idaho Research and Extension Center and then at the US Department of Agriculture National Grain Storage Bank as a maintenance mechanic.

Roland volunteered as an emergency medical technician and firefighter for the Aberdeen Fire Department for 25 years, where he served as Assistant Chief.  He was active throughout his life at First Mennonite Church in Aberdeen, serving as Sunday School teacher and  deacon; singing in choir, men’s chorus, and mixed quartet; and, most recently, serving as treasurer.

Survivors include his wife, Edith, of Aberdeen; four daughters Brenda Bartel and her husband Barry of Golden, Colorado; Sandra Duerksen and her husband Russell of Goessel, Kansas; Diane Isaak of Caldwell, Idaho; Mary Crist and her husband Brett of Columbia, Missouri; eight grandchildren and one great grandchild; two sisters Marge Krehbiel of Aberdeen, Idaho, and Ruth Isaak of Yakima, Washington, and one brother Irvin Isaak of Reedley, California.  Roland was preceded in death by brothers Elmer, Arthur, Harold,  Paul, William, and Walter and by one sister, Gertrude.

Visitation will be Sunday, January 25 from 4:30-6:00 p.m. at Davis Rose Mortuary in American Falls, Idaho.  A memorial service will be held Monday, January 26 at 11:00 a.m. at Aberdeen First Mennonite Church.

To order memorial trees or send flowers to the family in memory of Roland Earl Isaak, please visit our flower store.
Send a Sympathy Card