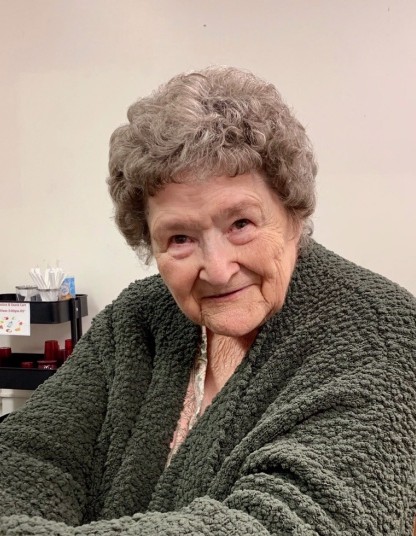 Sharel passed away peacefully with her children at her side.  Sharel was born to Joseph Bowen and Verda Miller Smith in Pocatello, Idaho.  Sharel had four older brothers Norman, Glen, Ronald, and Verl and one younger brother, M.V.   Sharel grew up in Pocatello, graduating from Pocatello High School in 1955.  After graduation, she went to Idaho State College and received a certificate in secretarial training.

Sharel met Robert Radford in October of 1956.  They met through Robert’s niece.  Two weeks later, Robert proposed to Sharel at the Rockland gas station.  On April 17, 1957, they were married in the Idaho Falls Temple.  After their wedding, they resided in Pocatello.  They were blessed with Karla, Bobby, Terri, Ronald, and Anna.

In 1969, Robert and Sharel leased the Sunset Motel and Robert went back to school.  She cleaned the motel rooms and also worked at Elmers Pancake House.  In 1974, Robert and Sharel moved their family to Rockland where he taught school.  Sharel went to work at Lamb Weston and later became an aide at the school.  They retired from the Rockland School District in 1999.

Sharel held many callings for the Church of Jesus Christ.  Her favorite calling was in Primary; she loved working with children.  She was also a member of the Daughters of Utah Pioneers and the American Legion.

“Grandma has ears that truly listen, arms that always hold, love that’s never ending, and a heart made of gold.”

Mom had the biggest heart. Over the years, there were numerous kids (family as well as kids who were not...but then became part of ours) who came to live with our parents. There was always room to help someone out. She adored her children, grandchildren and great grandchildren and was adored by all of us.  Over the past 5 months the nursing home went into quarantine and we were unable to physically visit. Social media made it possible for us to see mom’s big smile and we would get a surprise call from her via Facebook messenger. We saw a lot of the ceiling during the calls and would have to have her point the camera toward her face. She always could make us laugh. The last week of her life she was able to see her family in person. While she may not have always appeared to be awake, we knew she was listening because she would acknowledge something in the conversation. We held her hands, listened to music, told her we loved her and she would tell us the same. We were so fortunate to have this time with her at the end.

The family would like to thank the Power County Nursing Home staff for their love and care of Sharel.

There will be a viewing at Davis-Rose Mortuary, in American Falls, on Wednesday, September 2, 2020, between 6:00 and 8:00 p.m.  A graveside service will be held on Thursday, September 3, 2020 at 11:00 a.m. at the Rockland Cemetery.  The family requests that family and friends practice social distancing and wear masks at these events.

To order memorial trees or send flowers to the family in memory of Sharel Radford, please visit our flower store.