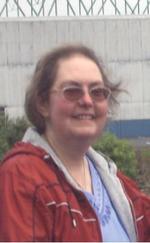 Shawna Rae Kopp Winberg of Aberdeen, Idaho, passed away at a local care facility on Thursday, July 21, 2011, from her five year battle with cancer. Shawna was born in American Falls, Idaho, on December 17, 1960, to her loving parents George Benard and Martha Marie (Hofmeister) Kopp. She was the youngest of four children. Her siblings Richard Kopp of American Falls, Marian Pena of Lawrenceville, Georgia, and Darlene Miller (deceased) loved to dote on their baby sister.

Shawna graduated from American Falls High School in 1979 and immediately started on her college endeavor. She received her associate degree in computer science at Idaho State University. She used her computer skills in her job and as a secretary at Pleasant Valley Potato, and later, Simplot fertilizer division in Aberdeen.

Shawna married Blaine Winberg in 1992 and moved to Aberdeen, Idaho, where they raised their two sons Damian Jacobson and Jeff Winberg. Shawna was so proud of her sons’ accomplishments. The most recent was Damian's service in the military and his deployment to Iraq.

Shawna loved to camp with her family and dog Saddie. One of their favorite places to go was Big Springs, between Bancroft and Lava, where they could enjoy the outdoors and ride motorcycles. Long walks with Blaine and board games in their fifth wheel were some of the pleasures they shared together on their camping trips. Shawna was always an avid reader. She often read into the night when she had a good mystery or romance novel started.

To order memorial trees or send flowers to the family in memory of Shawna Winberg, please visit our flower store.