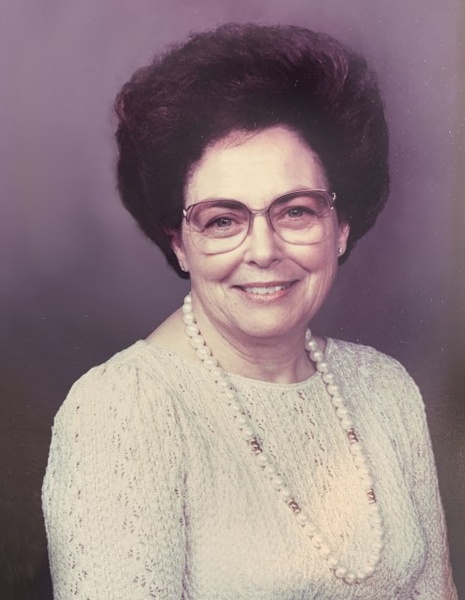 Shirley Dee Kendell, 93, of Aberdeen, Idaho, returned home to her sweetheart, Wayne Earl Kendell, at Edgewood Spring Creek Assisted Living in American Falls, Idaho, on May 20, 2020. Shirley was born in Idaho Falls on January 17, 1927, in Shelley, Idaho, to Ray and Ruby Thompson. She was the seventh of eight children.

Shirley attended elementary school in Shelley and high school in Aberdeen, Idaho. Her family was very close, sharing many great memories of road trips to Salt Lake City and Yellowstone National Park. Their car was always bulging with music and fun. The family motto was, “The More the Merrier.” Shirley and her siblings were taught to work hard and to play hard. Faith in God was a core value of her parents, who made the gospel a centerpiece of their home. Shirley maintained the faith instilled by her parents throughout her life.

After graduating high school in 1945, Shirley attended both Brigham Young University and Utah State University on music scholarships. She was a beautiful violinist, playing first chair in the BYU symphony. During a semester home, she met Wayne and their courtship began. They were married in the Idaho Falls Temple on November 30, 1949. They spent 68 wonderful years together and were blessed with three children, Karen, Lynn, and Traci, and foster daughter Larna. She was a mother to many that were embraced as family in the Kendell home.

Shirley loved having her family around. She kept a closet full of pajamas and a drawer full of toothbrushes so her grandchildren could stay over for a slumber party at a moment’s notice. She loved to take her grandchildren on shopping trips and to restaurants for nice dinners. She had a remarkable ability to make each of her children and grandchildren feel as though they were the favorite.

Music continued to be an important part of Shirley’s life. She encouraged many of her children and grandchildren to take music lessons. She continued to perform violin solos for weddings, community events, and church services and was known for her accomplished, moving performances. She was frequently accompanied by her daughter, Karen, a talented pianist. Karen’s death from cancer in 2001 was a formative trial for Shirley and Wayne. Following her death, Shirley never played the violin again. We love to imagine that they are performing together again for all of the relatives and loved ones that she has reunited with.

Shirley was an active member of the Church of Jesus Christ of Latter-Day Saints, in which she served for many years in various leadership callings. She served as a Merrie Miss leader for over fifteen years and is fondly remembered by an entire generation of Aberdeen women for teaching them elegance, etiquette, style, and wit. She and Wayne later served a mission to the Reykjavik, Iceland region of the Copenhagen Denmark Mission, where they served as the acting Mission President Couple to the Iceland missionaries. They cherished this experience and had great memories and stories of their time with their missionaries in Iceland.

Shirley also enjoyed her years in Boise, where she accompanied Wayne as he served in the Idaho Legislature. She enjoyed the political scene and was a mentor for many Republican Women, who she enjoyed gatherings with.

She had fond memories of her trips all over the globe with Wayne by her side. They traveled to nearly every continent, making friends and gathering souvenirs from each, including a piece of the Berlin Wall, which they happened to be visiting when it came down. Even when their travel slowed down, she and Wayne continued to take daily trips around the farm, visiting family and friends and enjoying every moment of their time together. After 68 years of marriage, they still loved being together wherever they went, holding hands and embarrassing their grandchildren with their blatant flirting. Their marriage was better than a fairy tale.

Shirley is remembered by her family for having the magical ability to feed an army at a moment’s notice while simultaneously maintaining a spotless kitchen. She and Wayne lived a life of generosity and service and spent their later years visiting the sick and elderly and attending to the needs of others. She always saw the good in others and would go out of her way to let people know they were cared for. She will be fondly remembered for her elegance, her sense of humor, her kindness toward others, her love of the gospel, and her deep love for her family.

She is survived by her son Lynn Kendell (Tammy Treasure Kendell), her daughter Traci Kendell Johns (Kevin Johns), her son-in-law Dennis Roberts (Jan Roberts), and her foster daughter Larna Meier (Robert Meier). She is also survived by 17 grandchildren and 43 great-grandchildren.

Shirley Kendell’s funeral services will include a viewing at 10 am and a private family service at 11 am, both at the Aberdeen Cemetery on Tuesday, May 26, 2020. Services will be broadcast through Zoom a link will be available at www.davisrosemortuary.com.

To order memorial trees or send flowers to the family in memory of Shirley Dee Kendell, please visit our flower store.