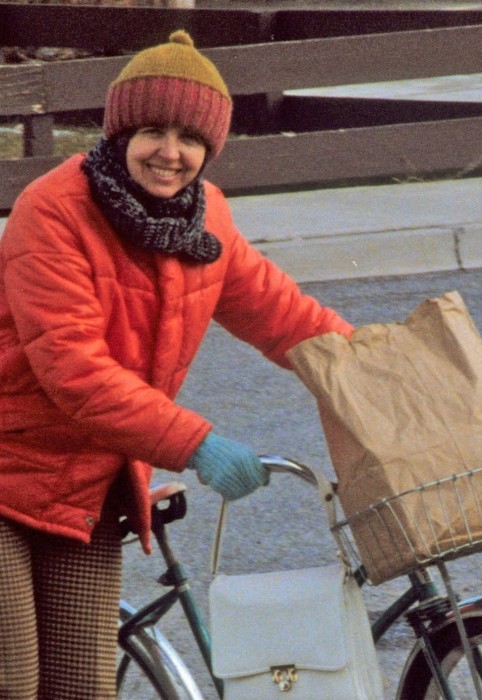 Born January 8, 1934 in Forst, Germany (Silesia region), Sigrid was the first of six children born to Willy and Elfriede Brunsch. During World War II, the 1945 Russian occupation of Silesia forced Sigrid and her family from their home. They settled in Cramme, West Germany. The war had displaced many families, and life was challenging.  Sigrid, her parents and older children worked on farms. Later she attended trade school and trained as a bookkeeper.

In 1951, Sigrid’s great uncle, Emil Brunsch, invited the family to join him in America, the land of opportunity. It took two years of planning and saving before Sigrid’s family emigrated from Germany and settled in Soap Lake, Washington. With resolve and hard work, they converted 80 acres of sagebrush into a productive farm.  Sigrid met her future husband, Galen McMaster, on a blind date in January 1954, and the two were married just four months later.  Galen worked as a county agent and land surveyor on the Columbia Basin reclamation project in central Washington.  The young couple lived in Mesa, Washington and Moscow and Aberdeen, Idaho before settling in American Falls where they lived for almost fifty years.

Sigrid’s four children—Roger, Vern, Dwight and Charlotte—were the joy of her life.  As well as being a wonderful mother to her children, she was a constant and enthusiastic volunteer for many organizations and was honored to be chosen as the 1985 Beta Sigma Phi Woman of the Year.  She was frequently asked, usually by young people, how much she was paid collecting for the American Cancer Society, delivering meals on her bicycle, or working at Trinity Treasures, and her joyful response was always “60 minutes an hour.”

Possessing a strong Christian faith, Sigrid was an active member of the United Church of Christ/Congregational, later the American Falls Community Church.

Sigrid also served as a crop and livestock enumerator for the Idaho Agricultural Statistics Society for over twenty years.

An avid bike rider, Sigrid was often seen making two trips a day from the family home to the Cardinal, Ken’s, or the post office.  While she was grateful to all who offered her a ride when they saw her biking downtown in a heavy snow, she was proud to say that she never accepted one.  Even after she could no longer ride her bike, she remained an enthusiastic walker and encouraged others in her community to do the same.

Sigrid and Galen enjoyed a long retirement, spending time camping and fishing in southeast Idaho and the surrounding area.  The couple also spent several summers floating their boat along the inside passage of Southeast Alaska and in the Puget Sound and San Juan Islands of Washington.  Sigrid enjoyed sewing, knitting, quilting and playing cards with her family and friends.

In 2013, and with much sadness at leaving lifelong friendships, Sigrid and Galen left American Falls and moved to an assisted living facility in Tacoma, Washington, to be closer to family.  Sigrid continued as a volunteer and developed lasting relationships with many other community members.

A loving wife, mother and grandmother, Sigrid is survived by sons Vern (LeeAnn) of Nezperce, ID and Dwight (Anne) of Burien, WA; daughter Charlotte Malarchick (Tim) of Gig Harbor, WA; brothers Wolfgang and Reinhard; sisters Ingrid and Waltraud; and 9 grandchildren, 6 great-grandchildren, 2 great-great grandchildren and many nieces and nephews.  She was preceded in death by Galen, her husband of 59 years, her eldest son Roger (Diana), her parents Willy and Elfriede, and her brother Manfred.

The family will have a private interment at a later date.

Thank you, Mom.  We are grateful for and humbled by the love you gave us.

To order memorial trees or send flowers to the family in memory of Sigrid Klara Ida McMaster, please visit our flower store.