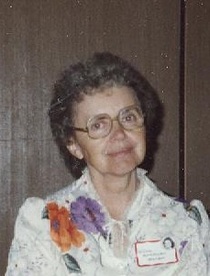 Silvia later went on to CTI (Christian Training Institute) in Albert, Canada from 1947-1948. She then met her husband Martin Brucker of 62 years and was married on July 20, 1952 in American Falls, Idaho in the Congregational Church. Their only child, Violet Rosina Brucker Isaak, was born December 2, 1953. They later went on to continue their studies at Idaho State University studying German. Martin and Silvia farmed in the American Falls area for the duration of their lives and Silvia was a strong advocate of the lifestyle.  Silvia was a homemaker and was well known for her raisin pies. She loved the Farm and the flexibility it gave her to raise her family and to have the family close. Out of the many memories we have of Grandma, we will always remember the devotion she had for her family and those that were close. If you take a look at her home today, you would see picture after picture of the family that she loved and cared about.

She taught piano lesson for her daughter, nieces, nephew, and grandnephews. She served in many different ways for organizations such as Gideons and Missionaries of Hope. Our grandparents volunteered for nearly 30 years holding Sunday services at Spring Creek Manor and the American Falls Hospital. They would also sing duets and funeral and Silvia would minister with her voice and her music whenever it was needed.

As a couple they also served in MAPS, an Assembly of God organization that would build schools and churches throughout the world. They traveled to Africa, Hawaii, Truk and the Marshal Islands. Her role in those trips would be helping to prepare meals for the building crews.

Just like her volunteering to serve others; she was the best grandmother one could have. She took care of us during harvest, picking up my brother and I from various sporting events. She always allowed us treats on our home from practice without our parents knowing.

Silvia was also a cancer survivor of 41 years.

She is survived by her husband Martin Brucker; sister Gertrude Buchholz of Avon, South Dakota; daughter Violet Isaak (Lamar); her two grandchildren Conrad Isaak of American Falls and RaNae Isaak of Columbus, IN and one great-grandchild Asher Isaak.

Silvia will be dearly missed and her legacy of a caring wife, mother, grandmother, and great-mother will never be forgotten.
To order memorial trees or send flowers to the family in memory of Silvia Marie Brucker, please visit our flower store.