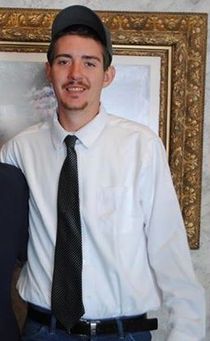 Steven Deloy Flackman 26 passed away unexpectedly in American Falls, ID on July 7 2014. He was born January 25th, 1988 in West Valley City, Utah to Di Ann Elizabeth Norton and Richard W Flackman Jr. He lived in various towns in Utah for most of his childhood and then moved to Evanston, Wyoming for most of his teenage years. In his early twenty's he moved to American Falls, ID with his sister for some fun adventures, he then moved back to Orem, Utah until early this summer when he decided to move back to the beautiful city of American Falls where he felt most at home and in his element.

He worked for Signature Pools of Utah where he enjoyed the creativity of pool designs. He got his GED at 16 years of age and was a very bright young man. He enjoyed camping with his family, smores around the campfire and being silly to make people laugh. He enjoyed fishing for catfish and loved fishing at the Snake River Dam in American Falls. He also loved to go boating with his family. His dog Reece's was the love in his life and they were rarely apart; they followed each other everywhere, you never saw one without the other. He was very proud of her and their bond. Steven had an incredibly big heart and made friends easily wherever he would go, and would give anyone anything if he had it to give.  He adored his family and boasted about his niece and nephews almost constantly. Steven would strike a conversation with almost anyone and always was able to find something in common no matter who you were. His spirit was larger than life and heaven has gained another angel even though it was far too soon. He was loved by many and will be forever missed we will hold him in our hearts forever and thank god for the blessings he brought to his family and friends lives.

Do not fear, for I am with you; do not be dismayed, for I am your God. I will strengthen you and help you; I will uphold you with my righteous right hand. Isaiah 41:10

The Family would like to thank the American Falls EMT's and the American Falls Police Department for their brave and unrelenting efforts and for the care you all provided to him and his family in what can only be described as a devastating loss.

The funeral service will be at 10:00 a.m. Monday, July 14, 2014 at The Church of Jesus Christ of Latter-day Saints, American Falls, 1st Ward, 111 Church Place, American Falls, Idaho. In Lieu of flowers the family is requesting donations be made to the â€œMemorial Fund of Steven Flackmanâ€ at the Bank of Commerce in American Falls. Condolences and memories may be shared at davisrosemortuary.com.

To order memorial trees or send flowers to the family in memory of Steven Flackman, please visit our flower store.