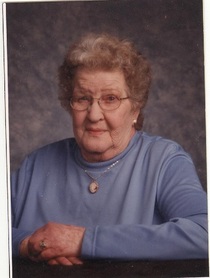 Sunbeam “Bea” Curl Heaton passed away Thursday, November 20, 2014 at Edgewood Spring Creek in American Falls.
Sunbeam was born on May 25, 1919, outside American Falls in Sunbeam to Thomas, J. and Consuella Hunt Thornton.  As a young girl she attended grade school in Sunbeam and high school in American Falls, riding her horse eight miles both ways.
Sunbeam married Lyle Mower in 1942; of this union no children were born. A few years later they divorced. In 1946 Sunbeam married John M. Curl, who was raising two sons, John and James, due to their mother’s death.  Sunbeam’s husband John suddenly died, 1982, of a heart attack.  In 1987, Sunbeam married her long time friend Dick Heaton. Dick died in 1990 of cancer.
In June 1944, Sunbeam joined the Army of the United States of America serving as a surgical technician. She received an honorable discharge in October, 1945.
Sunbeam was a life member of D.A.V. #3 Pocatello, a member of the American Legion, a past president of the VFW Auxiliary 3640 and served as Veteran Services Officer in Power County for many years. She also served as an American Falls City Judge for a few years and she was a charter member of the Women in Military Service for America.
At the age of 12, Sunbeam took her first job as a caretaker for women who did home births. Shortly after this, she worked as a switch board operator in Vale, Oregon working 4-10 with room and board and still managed to keep up with her studies. A year later she moved back home to finish her last two years of high school. Again working as a switchboard operator 4-10; however, this time she had to go out and tell people which operator had called so they could call her back (back then very few people had their own telephone). Sometime after her graduation she moved to Seattle taking a position as a nanny. She saved some money and went back home to start training as a nurse. She stopped nursing training to marry Lyle Mower who was a pilot and who later became a POW. Sunbeam then helped to make parachutes in St. George, Utah until she joined the Army. After the war, she was honorably discharged.  Lyle returned home and they later divorced.  Sunbeam returned home and found a job as a nurse.
Sunbeam was a member of the Church of Jesus Christ of Latter-day Saints. She loved to garden, quilt, read and paint pictures.
She is survived by sons John R. Curl, Grand Island NE and James F. (Rosemary) Curl, Pocatello; grandchildren Tracy Curl, Butte, MT; Carla (Troy) Vingom, PE; John B. Curl, Salt Lake City, UT; Katheryn (Edward), Bentley, Tacoma, WA; nine great grandchildren; and brother Darrell Thornton, Lima, MT. She was preceded in death by her parents, husbands, four brothers and two sisters.
A viewing for family and friends will be held Monday, November 24, 2014 at Davis-Rose Mortuary, 170 Idaho St., American Falls from 6:00-8:00 pm and on Tuesday, November 25, 2014 at 10:00 am at The Church of Jesus Christ of Latter-day Saints at 650 Pocatello Avenue in American Falls, Idaho with funeral services directly following at 11:00 am.  Interment will be in the Falls View Cemetery with military honors by the Roland Evans American Legion Post #3 and the Idaho Honor guard.
Condolences and memories may be shared at www.davisrosemortuary.com.

To order memorial trees or send flowers to the family in memory of Sunbeam "Bea" Curl-Heaton, please visit our flower store.
Send a Sympathy Card