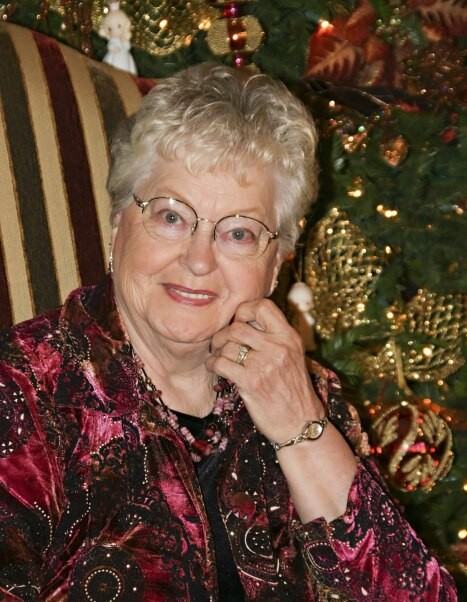 Sylvia and her family moved to Kamiah, Idaho where she graduated from high school in 1947.  After graduation she attended Northern Idaho College of Education (NICE) in Lewiston.  There she met the love of her life, a dark, handsome fellow named Tim Hayhurst.  They were married on August 7, 1949.  Tim was 22 and Sylvia 19.  That same year Sylvia received her 2-year teaching permit from NICE.

Tim and Sylvia’s first teaching jobs were in Winchester, ID where she taught in a multi-grade school room for two years.  In 1951, they both took jobs and moved to Stites where their lives were centered around school and family.  Debra joined their lives in 1954. Tim and Sylvia were so happy to be parents.  They showered her with so much love.  There couldn’t have been a luckier baby girl.

In 1959, the Hayhurst’s left all their friends and family and moved to American Falls for a new job opportunity. She had seen pictures of Sun Valley and thought that’s what their new home would look like.  But, there was very little irrigation in Power County at that time and the dry sagebrush desert of southeastern Idaho was a huge change for Sylvia after living in the green forests and plains for north Idaho for 30 years.  She said she was so homesick she cried and cried for the first year. But the many friends they made, both professionally and socially, became their new extended family and American Falls became their home. Shortly after moving to American Falls there second daughter, Tami, came into their lives.  She was a dark eyes, dark haired, beautiful baby.  They were now a family of four.

The state changed the education requirements to a 4-year teaching degree and Sylvia returned to college attending the University of Idaho during summers until she received her Bachelor of Science Degree in Education in 1962.

Sylvia taught four and fifth grades and was the media specialist at Hillcrest Elementary.  In 1965, when they thought their family was complete they added a wonderful, smart baby boy, Michael Lynn.  He completed their family.  She loved teaching and touched so many lives through learning.  Her fellow teachers and administrators were some of her closest friends and the children of School District #381 were her passion.  Tim and Sylvia both retired in 1987 after 40 plus years in education.  After retirement they enjoyed many years of traveling across the United States, Europe and even traveled to Australia to bring Mike back after his study abroad.

Sylvia was a wonderful mother, mother-in-law and grandmother and will be truly missed by all.  Her holiday dinners were extraordinary.  She was a wonderful cook and entertainer.  She welcomed her son-in-laws, Jim Tiede and Murray Jones and daughter-in-law, Sharon Martin, to her table.  And through the years Tim and Sylvia’s family turned from 2 to 30.  Enough love to go around.

Sylvia was a PEO member, bowler, avid golfer, played in numerous bridge clubs, member of Delta Kappa Gamma and St. Mary’s Catholic church.  She was also active in the American Falls Education Association where she was honored with the Service to Education Award.   She loved to crochet, arts and crafts, cook, travel, garden and follow her children and grandchildren to their many activities.  Her love of books and reading made her the perfect Media Specialists. She was not only an enthusiastic supporter of many school, community and church activities but also Tim’s biggest fan.  She loved, helped and supported him in everything.  Tim always looked so put together but most of their friends knew it was because of Sylvia.  Tim was color blind so she would even layout his clothes for school, trips or activities.  She didn’t want him showing up with mixed matched socks or plaids and stripes.  She was described by many as a classy lady, always put together and because of her so was Tim.

She was preceded in death by her husband of fifty plus years, Finis (Tim) Hayhurst, a grandson Joshua Lowe, parents Henry and Mae, sisters (Audrey, Jean, Ethel and Betty) and numerous close friends and family members.  She is survived by her three children, 8 grandchildren, 10 great grandchildren, sister (Carol), brother (Don), brother-in-law (Dutch), many nieces and nephews.

A special thanks to Edgewood Manor, Portneuf Medical Center, Davis-Rose Mortuary and many friends and family for their care and kindness over the last weeks.  We are so blessed.

To order memorial trees or send flowers to the family in memory of Sylvia G. Hayhurst, please visit our flower store.
Send a Sympathy Card