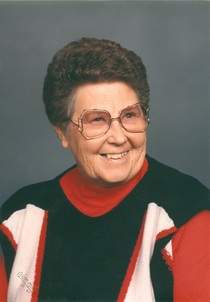 Thelma M. Robinson 99, passed away at her home in Aberdeen on August 27, 2016.  Thelma was born on October 4, 1916 to Albert and Annie Walker in Blackfoot, ID. Thelma married George Robinson on December 9, 1938 in Milford, Utah.
She worked as a grocery clerk for several stores in Aberdeen.  Later she worked at Lamb Weston in American Falls until retirement.  Thelma enjoyed crafts of all kinds, especially knitting. She also enjoyed watching sports on television. Thelma loved watching her great grandsons play baseball and football.  After her retirement she was very active with the senior center in Aberdeen and loved meeting there with the ladies once a week to do crafts and have lunch.
Even after her mobility was impaired her favorite activity was to go for car rides.  She didnâ€™t care where we went as long as she could have a soft ice cream cone either on the way there or on the way back or both if she could get away with it.
Thelma is survived by daughters, Patsy Sunderman, Twin Falls, ID and Penny Tubbs of Aberdeen, ID.  Surviving Grandchildren include George Newberry, Gail Howerton, Kathy Hayes, Layne Tubbs, Greg Newberry and Verl Tubbs. Eleven great grandchildren and twelve great great grandchildren also survive her.
Thelma was preceded by her husband George, parents Albert and Annie Walker, brother, Raymond Walker, sisters Ida Nungesser, Phyllis Steinlecht and Jean Fox.
We would like to thank Heritage Hospice for all their help and especially Dr. Mills, Patti Koger and Jeralyn Heron.
A graveside service will be at 1:00 p.m. Thursday, September 1, 2016 at the Aberdeen Cemetery, Aberdeen, Idaho.  Condolences and memories may be shared at www.davisrosemortuary.com.

To order memorial trees or send flowers to the family in memory of Thelma Marion Robinson, please visit our flower store.