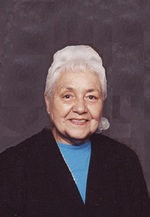 "Trudy" Gertrude Placida (Valerio) Lucero, surrounded by her loving family at home, was called Home with Savior Jesus Christ early Sunday, April 7th, 2013. Trudy was born September 16th, 1936 in Bondad, Colorado.  After growing up in Utah, Trudy married "Jesse" Juan Jesus Lucero in 1955. They went to France where Jesse was stationed in the U.S. Army.  Although far from home, newlywed Trudy enjoyed the adventures of living in France. Since she was already bilingual in English and Spanish, she was able to use the French dictionary to find a cozy apartment.  She made many friends and had fond memories of their time oversees. Of all their many European experiences, it was Barcelona that left the most amazing impression. Her two oldest childen Jesse and Tino were born in France.

Upon returning to the States, Trudy and Jesse settled in Aberdeen, Idaho where they raised their six children--Jesse, Christino, Carmelita, Veronica, Patricia, and Juan.  Her love of God was the cornerstone of her life. She spent her time reading His Word and sharing that with those around her. A favorite verse, Psalm 118:24, This is the day the Lord has made, we will rejoice and be glad in it, radiated to all who were fortunate to be near her.  In addition to caring for her family, Trudy dedicated her life in service to others. As the Migrant Home School Coordinator for the Aberdeen School District for approximately 22 years, Trudy helped migrant families settle into the community.  In this role, she was a bridge builder for different cultures and languages in the community.  She always taught her children to do the same.
As an Avon saleswoman, she built a devoted clientele and guided other women who were interested in starting their own business. Trudy liked to stay busy and even after retiring from the school district and Simplot, she could be found babysitting, participating in her church, volunteering at the local Senior Citizens Center. She served on the Fairview Estates Board and worked the polls on Election Day. Even when she was no longer able to be as active, she loved to attend church, hosted bible study at her home, and had a house full of visitors up until her last day.

Trudy loved spending time with her family and always had cookies or ice cream on hand for visits from her grandchildren and great-grandchildren. She enjoyed nature,
gardening and birdwatching as she loved to admire God’s creation.

Trudy was preceded in death by her beloved husband, Jesse; her parents, Juanita and Crestino Valerio, and brothers Crestino and David Valerio, sister Gloria Romero all of Utah. She is survived by her children, Jesse (Yolanda) Lucero of Ogden, UT, Christino Lucero, of Pocatello, Carmelita (Asnoldo) Benitez, Veronica (Eddie) McArthur, of Aurora, CO, Patricia (Mitch) Barker, of Gunnison, CO and Juan (Jessica) Lucero:

The family would like to extend their heartfelt gratitude to Laura Quezada and Nancy Palomares Torres}, for all of their dedicated and loving care for our mother, grandmother and great-grandmother over the last year.

The viewing will be from 6-8pm on Friday, April 12th at Davis Rose Mortuary, 170 Idaho St., American Falls. The funeral service will follow on Saturday, April 13th at 2:00 p.m. at Calvary Chapel in Aberdeen.  Condolences and memories may be shared at www.davisrosemortuary.com

To order memorial trees or send flowers to the family in memory of "Trudy" Gertrude Placida V. Lucero, please visit our flower store.