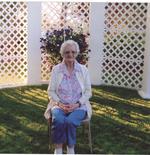 Velma was born on June 20, 1919, to Heber George and Delilah Rogers Wood in Pocatello, Idaho.  She joined six siblings followed by a sister Ann; she was predeceased by all her siblings.  She was raised in Arbon Valley, Idaho.  When her sister Ann was ready for high school, she and Velma both lived in American Falls and graduated from

She married Lloyd William Whitnah on March 5, 1945, and moved to the dry farm at Roy, Idaho.  Their son Douglas was born in 1945, followed by sister Edna in 1947, joining brother Roger at home.  In the spring of 1949, they moved to American

Falls, and purchased the Williams Dairy, west of American Falls on Borah Road.  They

She was a member of the LDS church.  She enjoyed crocheting and quilting, especially when several women would get together, to finish a quilt.  We’ve all received some of her fine handiwork in her quilts.  She was always so proud of her quilts and enjoyed showing them to everyone.

She was preceded in death by her parents, all of her siblings, her husband Lloyd and her son Roger.

The Funeral Service will be at 11:00 a.m. Thursday, March 15, 2012 at the Church of Jesus Christ of Latter-day Saints, American Falls 1st Ward.  The visitations will be at the Church from 6-8 p.m. Wednesday March 14, 2012 and from 10-10:45 a.m. Thursday before the funeral service.  Condolences and memories may be shared at www.davisrosemortuary.com.

To order memorial trees or send flowers to the family in memory of Velma Maxine Whitnah, please visit our flower store.