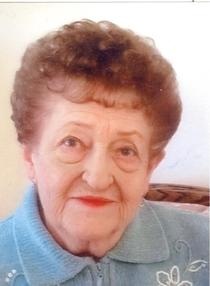 Verla Rae was born on August 28, 1930 in American Falls, Idaho to James and Janie Hartley of Rockland, Idaho. She passed away peacefully on January 30, 2014 shortly after being diagnosed with cancer. Most of Verla Rae’s childhood was spent at the Hartley ranch in the foothills of the Rockland Valley. She graduated from American Falls High School in 1948.

When Verla Rae was a senior in high school, while out for a drive with friends, their car broke down.  Four ruffians came and helped fixed the car. This group of eight young people soon became couples. George and Verla Rae were married on October 23, 1949 at her parents’ home in the Rockland Valley.

When George decided to propose to Verla Rae they went for a drive to Burley to purchase the rings. They then went to Twin Falls and George selected a secluded spot in what he thought was a city park. Much to their surprise it was a secluded cemetery. That is the kind of thing that makes for wonderful memories!

During the early years of their marriage, George farmed and raised cattle with his brother Ivan.

In June of 1952 their daughter, Sherrie, was born. The young family moved to American Falls, and in June of 1955 they welcomed their son, Kevin.

The opportunity of their lifetime came when George and Verla Rae purchased the A&W Drive In in American Falls. They stuck it out for over 23 years through two remodels, financial ups and downs, employees just not showing up for work as well as the usual hardships of being married business partners. Just as a side note, for many of those years Verla Rae could be found standing at her ironing board pressing each and every paper bill they deposited!

George and Verla Rae were co-owners of a condominium in Ketchum. Their family has many memories they will share forever. It was wonderful to go fishing with Grandpa and to the chocolate shop for goodies with Grandma. Ketchum is a wonderful place to just do nothing, and that was Verla Rae’s favorite activity away from the A&W.

Traveling to “The Hut” in St. George, Utah was also a fun filled get away for several years. From there they would visit Mesquite, Nevada and tour various historical sites nearby.

Four years ago George and Verla Rae sold their home in American Falls and moved to Idaho Falls. Their new home was Fairwinds at Sand Creek, first living independently and more recently transferring to assisted living.

Verla Rae played bridge (a lifelong passion), pinochle, hand and foot, bingo, as well as almost any other activities offered by Fairwinds. She and George especially enjoyed the Friday mystery drives on the Fairwinds bus, checking out new areas of their beautiful home state of Idaho.

Verla Rae is survived by her husband of 64 years, George; her son Kevin (Jolynn Orders), and daughter Sherrie (Chuck) Cox.  Verla Rae is also survived by four grandchildren and their spouses and six great grandchildren: Jessie (Travis) Kendall and daughters Kyla and Alyssa; Sara (Ben) Nally and sons Logan and Tristan; Justin (Amber Miller) and their son Brayton and Amanda (David Braden) and their daughter, Laela Minn; and by her sister-in-law Dorothy Hartley as well as many nieces and nephews.

Preceding Verla Rae in death were her parents, James and Janie Hartley; her two sisters, Barbara Jean and Dorothy Arlene; her two brothers, Harold and his wife Nora Dell and Glen.

Family and friends are welcome to help celebrate Verla Rae’s life by attending a viewing at 2:00 pm Saturday February 8, 2014 at the American Falls First United Methodist Church on Fort Hall Avenue with funeral services beginning at 3:00 pm. Following the services, burial will be at Valley View Cemetery in Rockland.

A time of fellowship will be held at the St. John’s Lutheran Church, 656 Tyhee Ave, American Falls.

Verla Rae’s family extends their gratitude for the care and compassion shown by the staff at Fairwinds and by the staff of One Source Hospice. A special thanks goes to Neeley Butler, who brought so much comfort not only to Verla Rae in her final days but also to those near her.

Thank you also to the many family and friends who have visited Verla Rae and George in the past few weeks.

To order memorial trees or send flowers to the family in memory of Verla Rae Haskell, please visit our flower store.