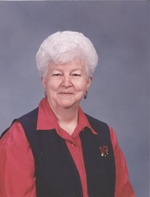 Verlene Mann, 85, passed away June 24, 2012 in American Falls, Idaho.  Verlene was born August 8, 1925 in Fort Collins, Colorado to William and Sarah Mariah Lankford.  She went to grade school and elementary in Pocatello and Grandview, Idaho.  She graduated from Aberdeen High School.  While there she was a cheerleader and met her sweetheart Robert Mann when she was a freshman.  They were married in Vallejo, California July 9, 1945.

They moved back to Aberdeen after Bob was released from the Navy.  They bought a farm north of Aberdeen where they lived until her passing.  She spent years working in the office at their auction company.  She was a member of the American Legion Auxiliary and helped with Girl’s State.  She volunteered at the Aberdeen Senior Citizen’s Center Thrift Store.  She loved to go camping and fishing with her family and friends.

Funeral service will be held at 10:00 a.m., Friday June 29, 2012 at First Mennonite Church, 381 W. Washington, Aberdeen, ID.  The visitation will be from 6-8:00 p.m. Thursday, June 28, 2012 at Davis-Rose Mortuary, 170 Idaho Street, American.  Interment will be in the Aberdeen Cemetery.   Condolences and memories may be shared at www.davisrosemortuary.com.

To order memorial trees or send flowers to the family in memory of Verlene Mann, please visit our flower store.
Send a Sympathy Card