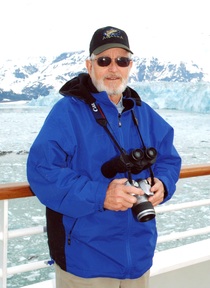 Wilford R. Sanders went to his home in glory on October 6, 2014. He celebrated his 76th birthday on September 19, 2014. Wilford leaves behind the love of his life and wife, Christine, children:  Robert of Moscow, ID, Randall of Hyrum, UT, Carl of Shelly, ID, Margaret Preston of Voluntown, CT, Catherine Fish of Las Cruces, NM, Michael of Irving TX, Christian of Pahrump, NV, and Mathew of Mansfield, TX, 39 grandchildren, and 9 1/2 great grandchildren, brother William, sisters:  Alma Buzzard, Wilma Pryce, Norma Stinson, and Betty Kirby.  Wilford was born in Warner, Oklahoma 1938 to Robert and Lucille Sanders.  Will, along with his siblings, entered the Sand Springs Home in 1953 after the death of their parents. He got his chauffeurâ€™s license at 16 and worked driving the home children and officials and the payroll for the oil wells in TX that were owned by the home.  He graduated from Sand Springs High School in 1957. While spending the summer in Aberdeen working as a farm hand, Will meet Christine Sterr and married her on June 12, 1958.  They were married 56 years.  Will landed a job with Kraft Foods in 1966 working his way up to one of three head cheese makers, developing new flavors of cheese and latter moved to the lab.  Will and Christine added farming into their lives when they moved to Firth in 1967, raising 8 children, sheep, chickens, cows, ponies, and pigs, depending on what his children were interested in at the time.  And one very large garden.  He helped his children with 4-H and FFA, and was made an honorary leader of the FFA 1977.  In 1976 Will went to work for U.P.S delivering packages North of Idaho Falls, until he received his CDL and started pulling the big rigs.  In 1990 they sold the farm, Christine was able to get her CDL, and they stared trucking as a team all over the country, while making their home once again in Aberdeen ID.  When Will â€œretiredâ€ from trucking he started working at the food bank of Aberdeen, which Christine still runs.  He was involved in Calvary Chapel.  Dad loved God, his family, life, laughter, fishing and a good prank.  He worked hard and would give freely of his time to help family, friend or stranger.  A memorial service will be held 5 pm, October 30, 2014 at the Mennonite Church in Aberdeen with fellowship and a pot luck dinner following.  Please feel free to wear working clothes, as Will was a working man all his life.  Donations to the Aberdeen Food Bank are preferred in lieu of flowers.

To order memorial trees or send flowers to the family in memory of Wilford R. Sanders, please visit our flower store.
Send a Sympathy Card