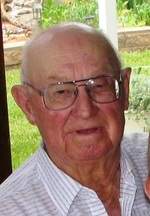 Willard Paul Richard, 88 (formerly of Aberdeen and American Falls, Idaho) of Loveland, Colorado passed away under Hospice care at McKee Medical Center in Loveland on December 15, 2011, from complications due to a broken hip.

Willard was born on March 7, 1923, to Emanuel and Lydia Brandt Richard in Olpe, Kansas. He was the youngest of eight children. He was raised in the Olpe & Emporia, Kansas area. On July 10, 1944 he married the love of his life, Ruth Ellen VanDorien in Kingman, KS. Willard and Ruth farmed west of Emporia, on the Chase County Line, until they were flooded out and decided to move to Idaho in February of 1946.

Willard farmed Southwest of Aberdeen, Idaho until 1972. Willard and Ruth retired from farming and moved into American Falls. He worked for area farmers and also drove truck for Partner Steel in Pocatello and Double L in American Falls, among others. He loved his 18 wheeler days and helping friends with planting crops and potato harvest. His favorite trips were the ones that he was able to take Ruth along on. They had a great love of travel that farming and dairy cattle had never allowed them to do before. Dad always talked about their trip to Caribou, Maine in the 18 wheeler.

They moved to Loveland, Colorado in May of 2004 to live with their oldest daughter due to Ruth’s failing health. Ruth passed away on April 12, 2008. Willard continued to live with his daughter and looked forward to trips back to Idaho for potato harvest and his share of those famous Idaho Potatoes. He always appreciated the Richard & Rob Giesbrecht and Roy & Doug Ruff families for allowing him to take potatoes back to Colorado. He loved going back to Kansas to visit family and old friends. He also enjoyed wandering through flea markets and garage sales with Bonnie.

In May of 2010, Willard was diagnosed with Polymyalgia Rheumatica (PMR) which made his leg muscles very weak and painful. Due to several falls, he was moved to Lakeview Commons Assisted Living in Loveland, where he lived until his death. His favorite pastime was playing with his great grandchildren, Tadhg and Rhiannon McDermid of Berthoud, CO. They truly adored their great grandpa and will sorely miss him. He also always enjoyed visiting with Jean Mayhew, a dear family friend in Loveland. We will always be grateful for the friendship she provided for him.

He is survived by his three daughters: Bonnie (John) McDermid of Loveland, CO.; Connie (Dr. Dale) Friesen of Lawrence, KS; Debbie (Dr. Roger) Tobias of Lyons, KS., and two sons: John (Marylyn) of Marsing, ID., and Ron of Moscow, Idaho. He is also survived by his sister Caroline “Kelly” Elliott of Burley, Idaho and his 12 grandchildren and 16 great grandchildren. Other survivors include many nieces and nephews who were very special in his life.

Arrangements in Loveland are being handled by Kibbey-Fishburn Funeral Home and in Aberdeen by Davis-Rose Mortuary of American Falls, Idaho.

Funeral services will be held at 10:30 AM, Tuesday, December 20, 2011 at the First Mennonite Church in Aberdeen, Idaho. A viewing will take place for one hour prior to the service. He will be laid to rest beside his wife Ruth in the Homestead Cemetery, southwest of Aberdeen following the service.

To order memorial trees or send flowers to the family in memory of Willard P. Richard, please visit our flower store.