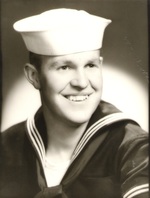 William Wesley Adkins passed away unexpectedly on October 7, 2012, at his home in American Falls, Idaho.  He was born on January 25, 1934, in American Falls, the youngest of twelve children born to William Harmon Adkins and Linnie Lee Pennington Adkins.  Growing up in rural American Falls, he took advantage of being horseback as often as possible.  He attended public school in American Falls and Lake Channel.

He worked for his bother Bud, in Monteview, haying and breaking horses before being drafted into the USS Navy.  He served in the Pacific, on the Aircraft Carrier, U.S.S. Shangri la from 1955-1957.  Wes married the love of his life on May 22, 1959 and together they have three boys, Jack, Mac and Kirk.  For 27 years Wes worked for Power County Implement and Bowler Ranches.  Here he raised his sons as cowboys; haying, calving, herding and feeding the cattle.  Special times were riding in the cattle trucks to summer range in Humphrey, Idaho.  Wes was a High Priest in the Church of Jesus Christ of Latter Day Saints.

Funeral Services will be held on Friday, October 12, 2012 at 11:00 a.m. at the American Falls LDS Stake Center.  The family will visit with friends on Friday morning from 9:00 a.m. to 10:45 a.m. at the church prior to the services.  Burial will be at the Neeley Cemetery.  Condolences and memories may be shared at www.davisrosemortuary.com.

To order memorial trees or send flowers to the family in memory of William Wesley Adkins, please visit our flower store.
Send a Sympathy Card