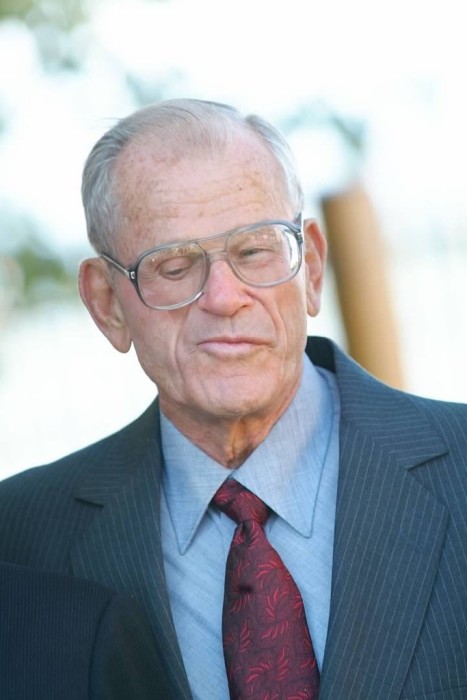 Bill Hauber, beloved husband, father, grandfather and great-grandfather, peacefully passed away Sunday, Aug. 4, 2019 in American Falls, ID. He was born April 7, 1926 in Celilo Falls, OR, to Louis and Ella Hauber.

Early in his childhood he was placed, along with his brother, in the Washington State Child Care system and spent his childhood years with foster families. His high school years were spent with Lawrence and Ella Kienholz and their son, Eddy, on their wheat ranch in eastern Washington. He attended Fairfield High School and participated in football, basketball, baseball, choir and drama.

He left high school a month before graduation in 1945 to join the U.S. Army. Because it was war time he was granted his high school diploma by the Fairfield School Administration. He served his tour of duty stationed in Korea. Upon his honorable discharge he returned to Washington state and attended Washington State University and was a member of the Delta Upsilon fraternity. Dad was on the WSU boxing team and was a lifelong Cougar fan and supporter.

In 1950 he met Loretta Jean Eaton, a beautiful young nursing student from Whitworth College in Spokane. On Jan. 6, 1951 they were married and settled in Ellensburg, WA.

Dad worked on his father-in-law’s cattle ranch, delivered milk and was a lumberjack. In the late 1950s he went to work for Stokely Van Camp (a frozen vegetable producer) as their office manager. During their years in Ellensburg four boys (Bruce, Gary, Glenn and Alan) were born. In 1964 he accepted a position as office manager with LB Foods, a new company in Othello which would be his life-long calling – French Fries. Shortly after going to work for them he was promoted to Plant Manager. In 1966 Lamb Weston purchased a small FF plant in Quincy. They hired Dad to be the Plant Manager. Dad worked hard to get that plant running efficiently and in 1970 he was asked to take over Lamb Weston’s largest plant, In American Falls. In 1973 he returned to the Quincy plant and oversaw the significant expansion of that facility.

During those years he always found time to follow his boys’ sports and activities. He was always active and supportive of the communities in which he lived and the schools his boys attended. He was a long time Rotarian and really enjoyed the Quincy Rotary Club.

In 1988 Dad flipped the switch and retired from the world of French fries so he could focus full time on his grandkids and great-grandkids. In his younger days he would take Mom to dinner and dancing on Saturday nights. Who can forget Elmer’s Tune by Glenn Miller!

Dad loved to fish. The back channels of the Yakima River, Canadian lakes, Alaska, the coastal waters of Oregon and Washington were some of his favorite haunts. Camping and traveling with their motorhome (always with a few grandkids along), visiting family, and taking care of his yard and trees kept him busy.

Their Quincy home was always a gathering place for the family. Many of the grandkids enjoyed extended stays with Papa and Gramma through the years. Golfing and visiting and drinking coffee with his buddies, especially Bill Watson and Joe Konishi, kept his wit sharp and on his toes.

Dad had a special place in his heart for animals and always had a dog or cat to keep him company or a few rabbits in the shrubs around the house.

Dad is survived by his loving wife of 68 years, Jean; sons, Bruce (Alida) of American Falls, Gary (Brenda) of Wenatchee, Glenn (Cynthia) of Vancouver, WA, and Alan (Sherie) of Wenatchee; 13 grandchildren and 15 great-grandchildren; and his older brother, Louis of Spokane. He was preceded in death by a granddaughter (Elva), a niece and two nephews, his parents, a half brother, and a half sister.

A celebration of Dad’s life will be held at a later date TBD in Washington state. Condolences and remembrances may be left on the web site at www.davisrosemortuary.com.

Dad/Papa – we will miss you and love you forever. We thank you for your leadership, guidance, humor, respect and love as the patriarch of this family

To order memorial trees or send flowers to the family in memory of William Robert Hauber, please visit our flower store.