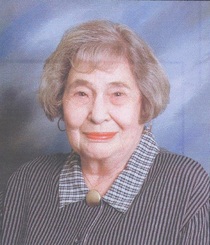 Wilmetta H. Meadows was born in American Falls on July 8, 1918 to William and Agnes (Burns) Hartley.  Her early years were spent on the Hartley ranch in Landing, Idaho.  She attended the Landing country school, where her mother was the teacher.  As she reached the secondary education level, she and her younger sister, Eleanor (Slusser), attended St. Teresa Academy in Boise, Idaho for 2 years.  She finished her secondary education and graduated from American Falls High School in 1935.  She attended the University of Idaho, southern branch, now Idaho State University, in their education program.  She began her teaching career in a one-room schoolhouse in Rockland, teaching all 6 grades.  For that she was paid $80 per month.  In 1940 she moved to American Falls and taught school for two years.

Wilmetta married Melvin Meadows on June 7, 1941.  They lived and farmed on the Meadows homestead.  In 1945, Melvin joined the Navy Seabees.  They were based for a short time in San Francisco.  When Melvin shipped out overseas, Willie came home to American Falls and worked for the Sheriffâ€™s Office and the Power County Ration Board.

Gary Meadows was born on June 6, 1945.  As the war drew to a close, Melvin returned home.  They returned to farming.  On December 8, 1947, their second son William was born.  They built a house in AF where they spent their winters.

On May 9, 1965 Mel died suddenly from a heart attack.  Willie and the boys continued to run the farm for the remainder of 1965-1966.  She leased the farm out so the boys could finish their educations.  Willie returned to the business world and worked in the Power County Clerk and Assessorâ€™s Offices.  In 1967, she went back to work at the American Falls School District for the Superintendent of Schools where she worked until her retirement in 1978.  She then became a fulltime grandma, helping to raise her four grandchildren.

She was active in the American Legion Auxiliary, Idaho School Board Association, Idaho Association of Educational Office Personnel, Pocatello Community Concert Association; civic fund drives for heart and cancer foundation, AF Ladies Golf Association, and several bridge clubs.  She was a member of St. Maryâ€™s Catholic Church.  She developed a passion for ceramics.  Willie was a gourmet cook and consummate entertainer.  She particularly was devoted to etiquette, a trait that she strenuously endeavored to pass on to her children and grandchildren.

Funeral services will be held 11:00 am, Monday, July 27, 2015 at St. Johnâ€™s Lutheran Church, 656 Tyhee in American Falls. A viewing will precede the funeral service at 9:30 am in the fireside room at the church. Interment will be in Fallsview Cemetery in American Falls. Condolences and memories may be shared at www.davisrosemortuary.com

To order memorial trees or send flowers to the family in memory of Wilmetta Meadows, please visit our flower store.